Finite Automata(FA) is the simplest machine to recognize patterns. The finite automata or finite state machine is an abstract machine that has five elements or tuples. It has a set of states and rules for moving from one state to another but it depends upon the applied input symbol. Basically, it is an abstract model of a digital computer. The following figure shows some essential features of general automation. 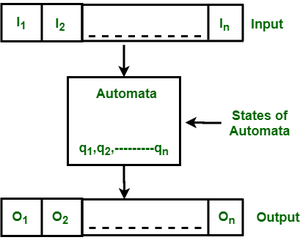 The above figure shows the following features of automata:

A Finite Automata consists of the following:

Formal specification of machine is

FA is characterized into two types:

In a DFA, for a particular input character, the machine goes to one state only. A transition function is defined on every state for every input symbol. Also in DFA null (or ε) move is not allowed, i.e., DFA cannot change state without any input character. 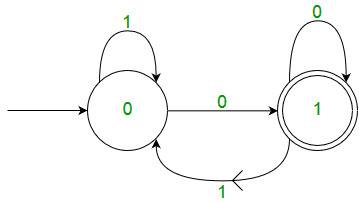 One important thing to note is, there can be many possible DFAs for a pattern. A DFA with a minimum number of states is generally preferred.

However, these above features don’t add any power to NFA. If we compare both in terms of power, both are equivalent.

Due to the above additional features, NFA has a different transition function, the rest is the same as DFA.

As you can see in the transition function is for any input including null (or ε), NFA can go to any state number of states. For example, below is an NFA for the above problem.

Since all the tuples in DFA and NFA are the same except for one of the tuples, which is Transition Function (δ)

On the RHS side, Q is the subset of 2Q which indicates Q is contained in 2Q or Q is a part of 2Q, however, the reverse isn’t true. So mathematically, we can conclude that every DFA is NFA but not vice-versa. Yet there is a way to convert an NFA to DFA, so there exists an equivalent DFA for every NFA.