In struts, the composite view manages the layout of its sub-views and can implement a template, making persistent look and feel easier to achieve and customize across the entire application. A composite view is made up by using other reusable sub views such that a small change happens in a sub-view is automatically updated in every composite view.

Features of Struts: Struts has the following features: 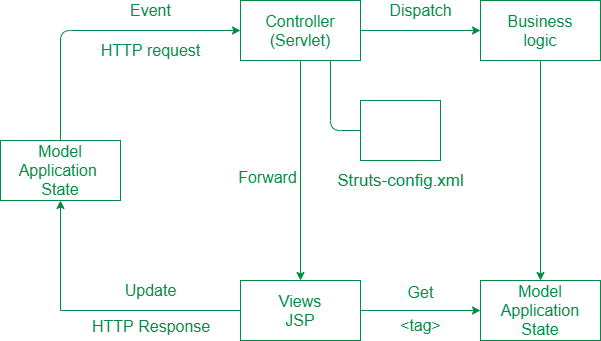 In the initialization phase, the controller rectify a configuration file and used it to deploy other control layer objects. Struts configuration is form by these objects combined together. The struts configuration defines among other things the action mappings for an application.
Struts controller servlet considers the action mappings and routes the HTTP requests to other components in the framework. Request is first delivered to an action and then to JSP. The mapping helps the controller to change HTTP requests into application actions. The action objects can handle the request from and responds to the client (generally a web browser). Action objects have access to the applications controller servlet and also access to the servlet’s methods. When delivering the control, an action objects can indirectly forward one or more share objects, including javabeans by establish them in the typical situation shared by java servlets.