Large object (LOB) locators let you reference a LOB in Transact-SQL statements rather than referencing the LOB itself as the size of a text can be unitext, or image LOB can be many megabytes. Using a LOB locator in Transact-SQL statements helps to reduce network traffic between the client and SAP ASE and also reduces the amount of memory which would be needed by the client to process the LOB. SAP ASE or Sybase ASE help client applications to send and receive locators as host variables and parameter markers.

A LOB locator will remain valid for the duration of the transaction in which it was created. SAP ASE performs validation which invalidates the locator whenever the transaction commits or is rolled back. 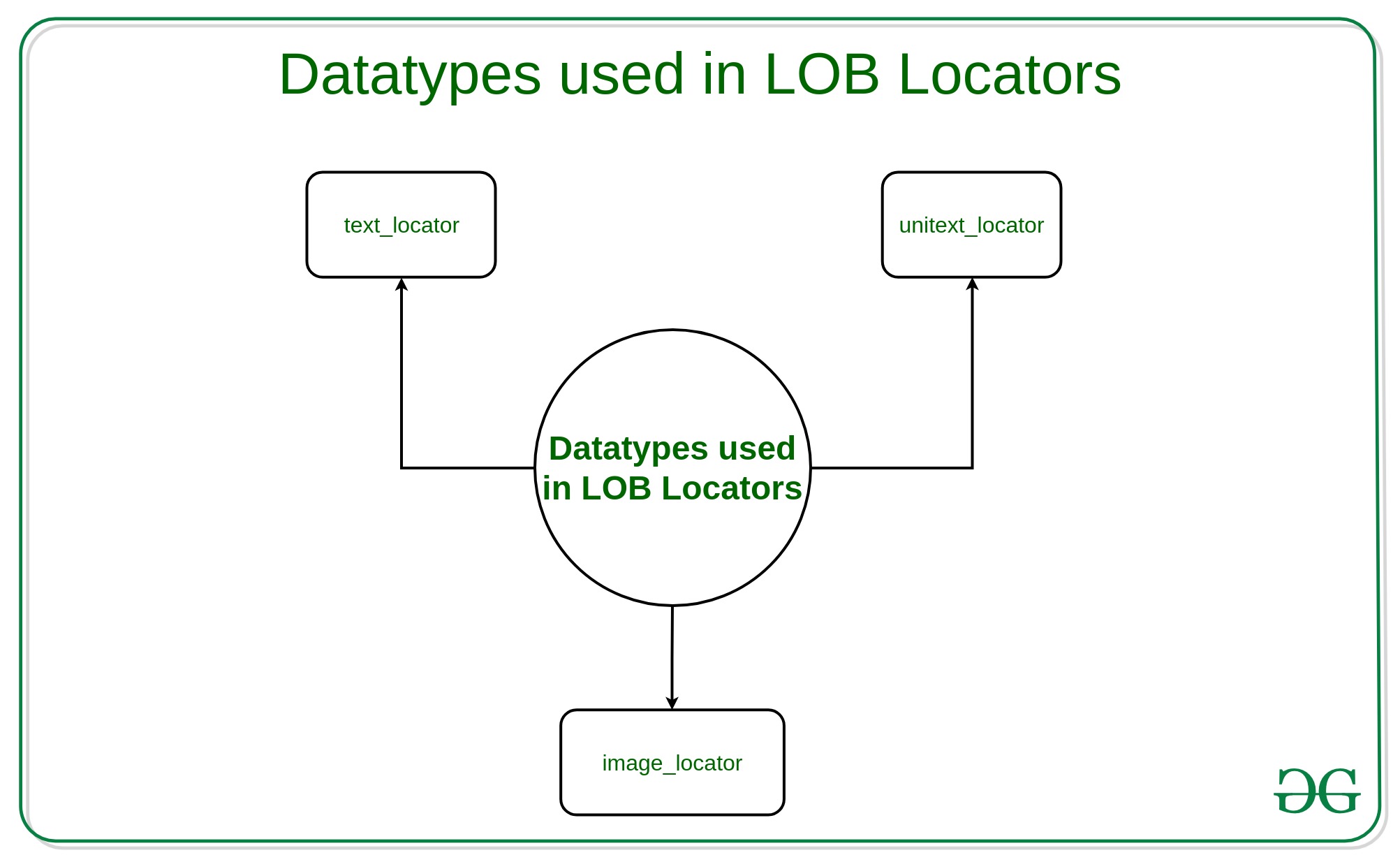 Because LOBs and locators are stored only in memory, you cannot use locator datatypes as column datatypes for user tables or views, or in constraints or defaults.

Creating a LOB Locator: One can create a LOB locator explicitly or implicitly.

A LOB instance has both a locator and a value. The LOB locator is referred to where the LOB value is physically stored. The LOB value is termed as the data stored in the LOB.

Whenever you use a LOB in an operation such as passing a LOB as a parameter, you are actually passing a LOB locator. For most of the part, you can work with a LOB instance in your application without being concerned with the semantics of LOB locators. There is no need to de-reference LOB locators because it is required with pointers in some programming languages.

There are still some issues regarding the semantics of LOB locators and how LOB values are stored that you should be aware of.

You can also create temporary LOBs, that are like local variables, to assist the use of database LOBs. Temporary LOBs are not associated with any table, they are only accessible by their creator, have locators (which is how they are accessed), and are deleted when a session ends.

There is no support for temporary BFILES. Temporary LOBs are only permitted to be input variables (IN values) in the WHERE clauses of INSERT, UPDATE, or DELETE statements. They are also permitted as values inserted by an INSERT statement, or a value in the SET clause of an UPDATE statement. Temporary LOBs have no transactional support from the database server, which means that you cannot do COMMITS or ROLLBACKs on them.

Temporary LOB locators can span transactions. They also are deleted when the server abnormally terminates, and when an error is returned from a database SQL operation.

LOB Locators in Your Application
To use a LOB locator in Pro*C/C++ application, we have to include the oci.h header file and have to declare a pointer to the type OCIBlobLocator for BLOBs, OCIClobLocator for CLOBs and NCLOBs, or OCIBFileLocator for BFILEs.

For an NCLOB, you can either

My Personal Notes arrow_drop_up
Previous
Basic operations and Working of LOB
Next
SQL | Creating Roles
Recommended Articles
Page :
LOB Locator and LOB Value
07, Aug 19
Basic operations and Working of LOB
07, Aug 19
LOB Rules and Restrictions
30, Jul 19
Types of Big Data
26, Nov 21
7 Best Books for Database Administrators and Developers
17, Nov 21
Components and Analysis of Star Schema Design
01, Nov 21
How to Configure RAID?
01, Nov 21
What is NULL ? Give an example to illustrate testing for NULL in SQL. What is dangling tuple problem ?
01, Nov 21
What is Data Normalization and Why Is It Important?
04, Oct 21
What is SQL?
04, Oct 21
How to Show Schema of a Table in MySQL Database?
23, Sep 21
How to Limit Query Results in SQL?
11, Sep 21
Article Contributed By :

Full Stack Development with React and Node JS - Live Classes
View Details
Most popular in DBMS
More related articles in DBMS
We use cookies to ensure you have the best browsing experience on our website. By using our site, you acknowledge that you have read and understood our Cookie Policy & Privacy Policy