An observation which differs from an overall pattern on a sample dataset is called an outlier.

Outliers:
The outliers may suggest experimental errors, variability in a measurement, or an anomaly. The age of a person may wrongly be recorded as 200 rather than 20 Years. Such an outlier should definitely be discarded from the dataset.
However, not all outliers are bad. Some outliers signify that data is significantly different from others. For example, it may indicate an anomaly like bank fraud or a rare disease.

What is Interquartile Range IQR?

IQR is used to measure variability by dividing a data set into quartiles. The data is sorted in ascending order and split into 4 equal parts. Q1, Q2, Q3 called first, second and third quartiles are the values which separate the 4 equal parts.

Example:
Assume the data 6, 2, 1, 5, 4, 3, 50. If these values represent the number of chapatis eaten in lunch, then 50 is clearly an outlier.
Step by step way to detect outlier in this dataset using Python:

Step 2: Take the data and sort it in ascending order.

Step 5: Data points greater than the upper limit or less than the lower limit are outliers 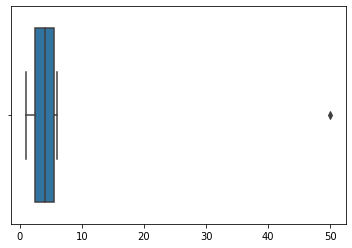 Step 7: Following code can also be used to calculate IQR

Conclusion: IQR and box plot are effective techniques to detect outliers in data.

Previous
Python - Add custom dimension in Matrix
Next
ML - Advantages and Disadvantages of Linear Regression
Related Articles
1. Detect and Remove the Outliers using Python
2. Interquartile Range and Quartile Deviation using NumPy and SciPy
3. What is Box plot and the condition of outliers?
4. Python | Detect corner of an image using OpenCV
5. Python Program for Disjoint Set (Or Union-Find) | Set 1 (Detect Cycle in an Undirected Graph)
6. Python Program for Detect Cycle in a Directed Graph
7. How to Detect Shapes in Images in Python using OpenCV?
8. Python | Detect Polygons in an Image using OpenCV
9. Detect an Unknown Language using Python
10. Detect an object with OpenCV-Python
Article Contributed By :