IP version 6 is the new version of Internet Protocol, which is way better than IP version 4 in terms of complexity and efficiency. Let’s look at the header of IP version 6 and understand how it is different from the IPv4 header. 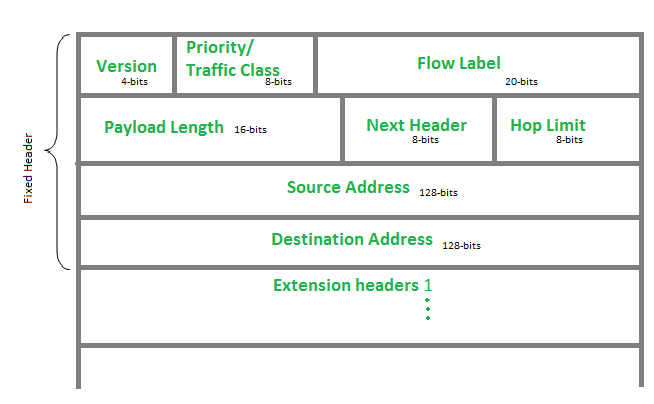 Traffic Class (8-bits): The Traffic Class field indicates class or priority of IPv6 packet which is similar to Service Field in IPv4 packet. It helps routers to handle the traffic based on the priority of the packet. If congestion occurs on the router then packets with the least priority will be discarded.
As of now, only 4-bits are being used (and the remaining bits are under research), in which 0 to 7 are assigned to Congestion controlled traffic and 8 to 15 are assigned to Uncontrolled traffic. 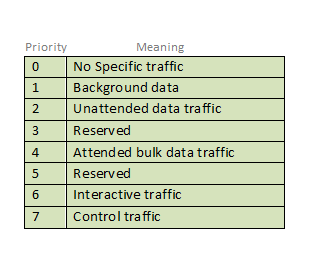 Flow Label (20-bits): Flow Label field is used by a source to label the packets belonging to the same flow in order to request special handling by intermediate IPv6 routers, such as non-default quality of service or real-time service. In order to distinguish the flow, an intermediate router can use the source address, a destination address, and flow label of the packets. Between a source and destination, multiple flows may exist because many processes might be running at the same time. Routers or Host that does not support the functionality of flow label field and for default router handling, flow label field is set to 0. While setting up the flow label, the source is also supposed to specify the lifetime of the flow.

Payload Length (16-bits): It is a 16-bit (unsigned integer) field, indicates the total size of the payload which tells routers about the amount of information a particular packet contains in its payload. The payload Length field includes extension headers(if any) and an upper-layer packet. In case the length of the payload is greater than 65,535 bytes (payload up to 65,535 bytes can be indicated with 16-bits), then the payload length field will be set to 0 and the jumbo payload option is used in the Hop-by-Hop options extension header.

Next Header (8-bits): Next Header indicates the type of extension header(if present) immediately following the IPv6 header. Whereas In some cases it indicates the protocols contained within upper-layer packets, such as TCP, UDP.

Hop Limit (8-bits): Hop Limit field is the same as TTL in IPv4 packets. It indicates the maximum number of intermediate nodes IPv6 packet is allowed to travel. Its value gets decremented by one, by each node that forwards the packet and the packet is discarded if the value decrements to 0. This is used to discard the packets that are stuck in an infinite loop because of some routing error.

IPv6 packet may contain zero, one or more extension headers but these should be present in their recommended order:

Rule: Hop-by-Hop options header(if present) should always be placed after the IPv6 base header.