Everything around us is a matter which has some physical and chemical properties. Matter around us exists in different states. For a matter to occur in different states there has to be some kind of force between the atoms of this matter to hold the atoms together. Let’s understand these forces which are responsible for the existence of matter. Forces can be understood as some kind of fastener that holds things or bind them together.

In the case of atoms, some kind of force is needed to keep the atomic particles electrons, protons and neutrons inside the atom and hold them together for the stability of atoms. Electrons move in circular orbitals around the nucleus of an atom because of different forces that are present to provide stability.

Intermolecular forces can be defined as the attraction or repulsion forces that are applied to atoms and molecules when they interact with each other whether at the time of phase change or in chemical reactions. Electrostatic forces which are present between ions having different charges are not considered intermolecular forces.

Intermolecular forces are mainly of five types as discussed below:

Dispersion Forces or London Forces can be defined as the attraction forces which are being applied between two temporary dipoles. These forces distort the electron cloud density of atoms. These forces are attractive in nature and these are named after a  German physicist Fritz London and that’s why they are also known as London Forces.

Let’s understand these forces with an example so take two atoms X and Y which are very close to each other but are not in contact so charge distribution at any point of time if get disturbed in any of the atoms then due to the effect of London forces the charge cloud of other atoms also gets disturbed. 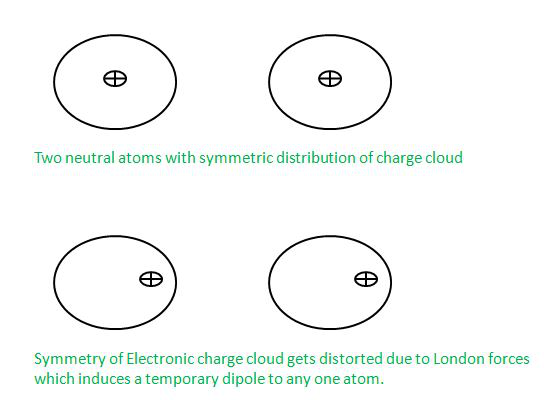 Dipole-Dipole Forces can be defined as the forces which act between the molecules having permanent dipole. The dipole can be understood as a pair of opposite charges on a molecule or on a bond.

Let’s understand with an example Dipole-Dipole Forces acting between molecules of HCl as HCl molecules have permanent dipoles and due to this on Cl side, electronic charge cloud density is more than Hydrogen side. 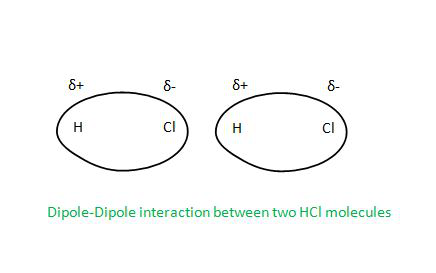 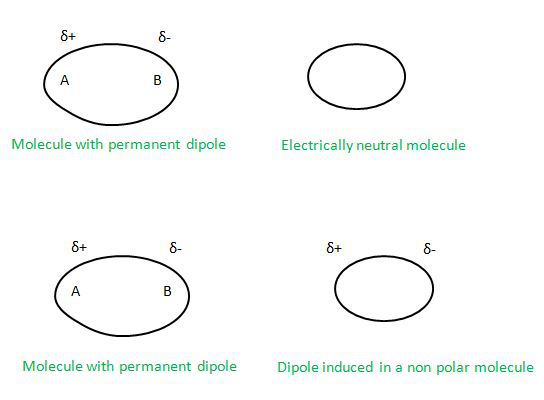 This is the attraction between a polar molecule and an ion (cation or anion). When NaCl is dissolved in water, the polar water molecules are attracted to the Na+ and Cl– ions (a process known as ion hydration). The strength of this contact is determined by the polar molecule’s dipole moment and size, as well as the charge and size of the ion. Because the cation has a higher charge density than the same-charged anion, this contact is generally stronger with the cation. Furthermore, because CCl4 is non-polar, it cannot interact with the cations Na+ and Cl–. As a result, NaCl is insoluble in CCl4.

Because the charge of any ion is substantially more than the charge of a dipole moment, ion-dipole attraction forces are stronger than dipole-dipole interactions.

Haemoglobin, for example, is present in red blood cells (RBC). It has a Fe2+ ion in its core, which attracts the O2 ion through the ion-induced dipole force.

Thermal Energy can be defined as the energy which arises due to the motion of atoms and molecules of any system. The motion of particles of a system is known as thermal motion which gives rise to thermal energy and this thermal energy varies directly with the temperature.

The energy of a single particle due to motion is known as kinetic energy but the average energy of all particles gives the measure of thermal energy.

Question 1: Why liquids and solids are hard to compress?

Question 2: What is a Hydrogen Bond?

Hydrogen bonding can be understood as a special powerful type of dipole-dipole interaction. Hydrogen bond formation is shown by only a few elements so it is kept separately from other intermolecular forces. Molecules which are strongly polar shows the tendency to form hydrogen bonding so molecules of Nitrogen, Oxygen and Fluorine are able to make hydrogen bonds.

Question 3: How interaction energy of London forces depends on the distance between two particles?

The interaction energy of London forces varies inversely to the sixth power of the distance between two particles.

where x is the distance between two particles

Question 4: Is hydrogen bonding is limited to nitrogen, oxygen and fluorine molecules only?

Yes, it is true that hydrogen bonding is considered limited to Nitrogen, Oxygen and Fluorine, but there are some special cases where hydrogen bonding can be seen in Chlorine also. Hydrogen bonds have a large amount of energy somewhat between 10 to 100 kJ mol-1, so hydrogen bonds are very powerful hence these helps in the determination of the structure and properties of many compounds.

Question 5: How interaction energy of dipole-dipole forces depends on the distance between two particles?

where x is the distance between two particles.

The interaction energy of dipole-dipole forces varies inversely to the sixth power of the distance between two particles in the case of rotating polar molecules.

where x is the distance between two particles.