To construct various images and graphics in interactive manner, there are different methods which are built into various graphics packages. These packages contains various options which help user to enter information of coordinate by using stroke devices or various locators. These coordinates helps in creating boundaries for various objects which user is going to drawn.

Positioning Constraints :
Constraint is rule which is used by user to change value of coordinates to produce required alignment of displayed coordinates. There are 3 types of positioning constraints which are as follows : 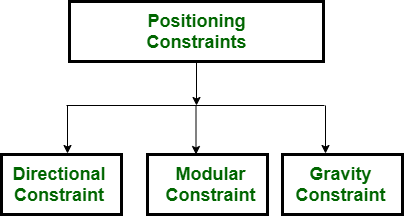 Rubber Band Method :
This method is used to construct and position straight line segments. This method stretch line from starting position as movement of screen cursor. The user first selects position from one endpoint of line and then it moves cursor around, hen line is displayed from where user start cursor and position where cursor is placed now. Finally when user selects second endpoint on screen, then final line is displayed from starting endpoint to second endpoint on screen.

The name is Elastic or Rubber Band Technique because of effect of elastic line which is stretched between first endpoint and cursor.

In this method user will get idea about line which user is drawing before actually fixing that line.

This method is also used to draw other geometric entities like arc and rectangles. The rectangle using this method is shown in the following figure:

Inking :
It is other technique used to create geometric patterns.
In this method locator itself leaves trail of line segment as way pen leaves trail of ink.
There is no need of pushing button for every line segment in required picture. In this method automatically new line is drawn when locator move towards sufficient distance which is as shown in the following figure: 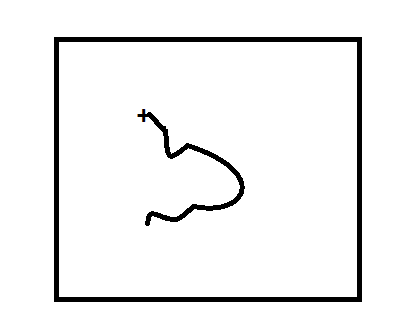