Android Studio is the best IDE for android development. Plenty of plugins are available and they can be installed easily via Android Studio itself. In computing, a plug-in is a software component that adds a particular characteristic to an existing computer program. When a program supports plug-ins, it enables customization. Plugins are a great way to increase productivity and overall programming experience.⁣⁣ Some tasks are boring and not fun to do, by using plugins in the android studio you can get more done in less time. One such plugin that we are going to see in this article is “Codeglance Plugin“.

When we have a large class, we need to scroll up and down, and hence only a limited text according to our screen size, we can see the code. At the same time, if we want to know in which section of the code, we are in and highlight few texts and check as a “Code Minimap to Android Studio like in Sublime kind of editors“, that is all can be done easily using Codeglance plugin. Some important features are:

Step 1: Go to the File > Settings > Plugins > Search for CodeGlance as shown in the below image. 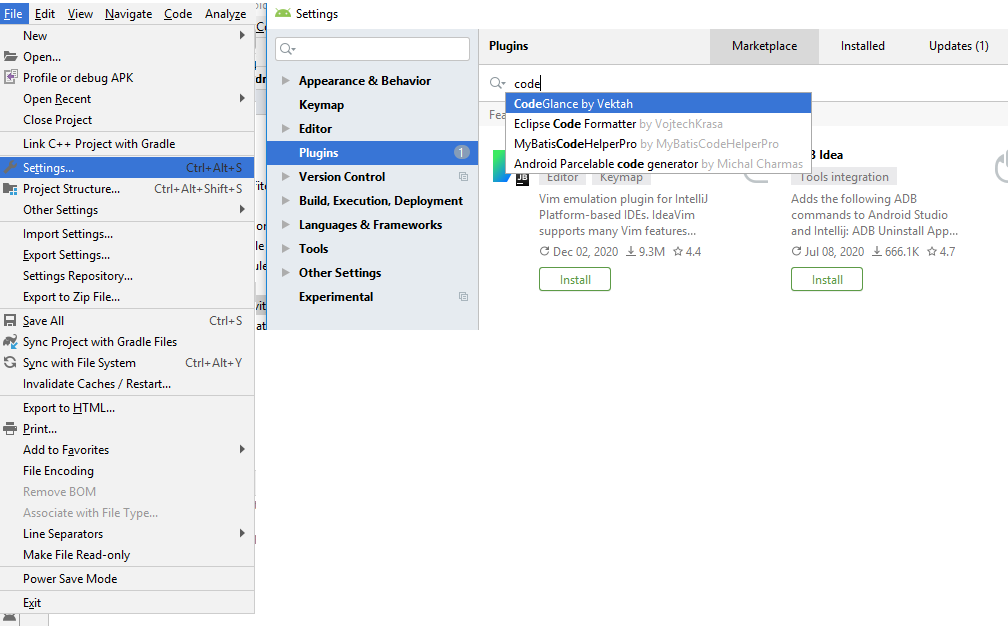 Step 2: Install the plugin and it will ask to restart android studio. (Once installed, it will get list out in the installed plugin section. For the first time, it is available to install). Upon doing that, inside your project, open an activity file. In the right corner, you can able to see Code Minimap as shown in the below screenshot

And also if we highlight any text during code view, in code minimap too, that text is shown as highlighted and shown. Let us see that.

So, the CodeGlance plugin is the very best plugin that can easily be integrated with Android Studio itself (free only), and once installed, Android studio needs to get restarted and the next time onwards, one can easily look at the code in the minimap section. The Minimap section of code is applicable to all files, i.e. XML, java, gradle, etc. Let us see them via relevant screenshots

The selected text is highlighted here

Codeglance embeds a code minimap similar to the one found in Sublime into the editor pane. Works with both light and dark themes using your customized colors for syntax highlighting. Let us check a few examples with the dark theme. First, convert that in the android studio by clicking the File > Appearance & Behavior > Appearance and In theme select Darcula and apply dark background theme editor.