Built-in Form Field Validations in Django Forms are the default validations that come predefined to all fields. Every field comes in with some built-in validations from Django validators. Each Field class constructor takes some fixed arguments.

initial is used to change the value of the field in the input tag when rendering this Field in an unbound Form. initial accepts as input a string which is new value of field. The default initial for a Field is empty. Let’s check how to use initial in a field using a project.

Illustration of initial using an Example. Consider a project named geeksforgeeks having an app named geeks.

Enter the following code into forms.py file of geeks app. We will be using CharField for experimenting for all field options.

Now to render this form into a view we need a view and a URL mapped to that view. Let’s create a view first in views.py of geeks app, 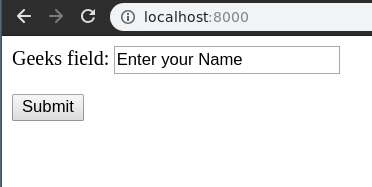 Thus, an geeks_field CharField is created with initial “Enter your Name”.