Why and when to use inheritance?

You can clearly see that above process results in duplication of same code 3 times. This increases the chances of error and data redundancy. To avoid this type of situation, inheritance is used. If we create a class Vehicle and write these three functions in it and inherit the rest of the classes from the vehicle class, then we can simply avoid the duplication of data and increase re-usability. Look at the below diagram in which the three classes are inherited from vehicle class:

Using inheritance, we have to write the functions only one time instead of three times as we have inherited rest of the three classes from base class(Vehicle).
Implementing inheritance in C++: For creating a sub-class which is inherited from the base class we have to follow the below syntax.
Syntax:

Here, subclass_name is the name of the sub class, access_mode is the mode in which you want to inherit this sub class for example: public, private etc. and base_class_name is the name of the base class from which you want to inherit the sub class.
Note: A derived class doesn’t inherit access to private data members. However, it does inherit a full parent object, which contains any private members which that class declares.

In the above program the ‘Child’ class is publicly inherited from the ‘Parent’ class so the public data members of the class ‘Parent’ will also be inherited by the class ‘Child’.
Modes of Inheritance

Note : The private members in the base class cannot be directly accessed in the derived class, while protected members can be directly accessed. For example, Classes B, C and D all contain the variables x, y and z in below example. It is just question of access.

The below table summarizes the above three modes and shows the access specifier of the members of base class in the sub class when derived in public, protected and private modes:

Types of Inheritance in C++

1. Single Inheritance: In single inheritance, a class is allowed to inherit from only one class. i.e. one sub class is inherited by one base class only. 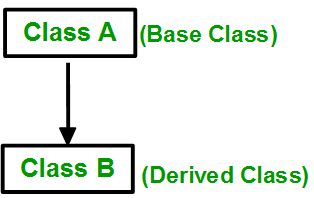 Here, the number of base classes will be separated by a comma (‘, ‘) and access mode for every base class must be specified. 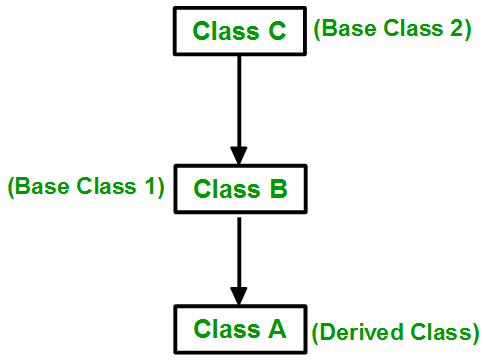 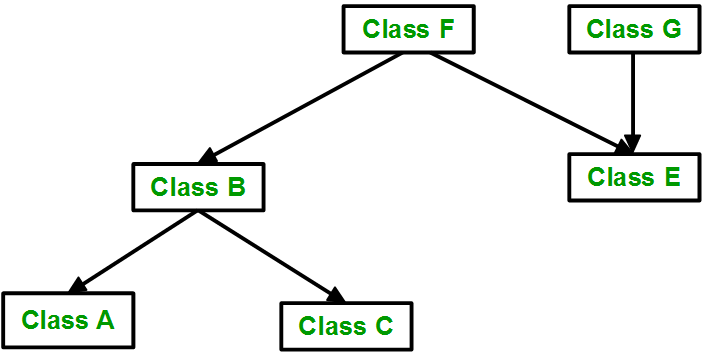 In the above example, both ClassB & ClassC inherit ClassA, they both have single copy of ClassA. However ClassD inherit both ClassB & ClassC, therefore ClassD have two copies of ClassA, one from ClassB and another from ClassC.
If we need to access the data member a of ClassA through the object of ClassD, we must specify the path from which a will be accessed, whether it is from ClassB or ClassC, bco’z compiler can’t differentiate between two copies of ClassA in ClassD.
There are 2 ways to avoid this ambiguity:
Avoiding ambiguity using scope resolution operator:
Using scope resolution operator we can manually specify the path from which data member a will be accessed, as shown in statement 3 and 4, in the above example.

Note : Still, there are two copies of ClassA in ClassD.
Avoiding ambiguity using virtual base class:

According to the above example, ClassD has only one copy of ClassA, therefore, statement 4 will overwrite the value of a, given at statement 3.
This article is contributed by Harsh Agarwal. If you like GeeksforGeeks and would like to contribute, you can also write an article using write.geeksforgeeks.org or mail your article to contribute@geeksforgeeks.org. See your article appearing on the GeeksforGeeks main page and help other Geeks.

Complete Interview Preparation
View Details
System Design-Live Classes for Working Professionals
View Details
Data Structures & Algorithms- Self Paced Course
View Details
Most popular in C++
Most visited in School Programming
We use cookies to ensure you have the best browsing experience on our website. By using our site, you acknowledge that you have read and understood our Cookie Policy & Privacy Policy