Sum Rule – If a task can be done in one of n1 ways or one of n2 ways, where none of the set of n1 ways is the same as any of the set of n2 ways, then there are n1 + n2 ways to do the task. The sum-rule mentioned above states that if there are multiple sets of ways of doing a task, there shouldn’t be any way that is common between two sets of ways because if there is, it would be counted twice and the enumeration would be wrong.

Below are some examples to explain the application of inclusion-exclusion principle:

Now if we add the above sets of ways and conclude that it is the final answer, then it would be wrong. This is because there are strings with start with ‘1’ and end with ’00’ both, and since they satisfy both criteria they are counted twice.
So we need to subtract such strings to get a correct count.
Strings that start with ‘1’ and end with ’00’ have five characters that can be filled in 25=32 ways.
So by the inclusion-exclusion principle we get- Total strings = 128 + 64 – 32 = 160

. Number of numbers divisible by 4 =

.Number of numbers divisible by 3 and 4 =

Therefore, number of numbers divisible by 3 or 4 = 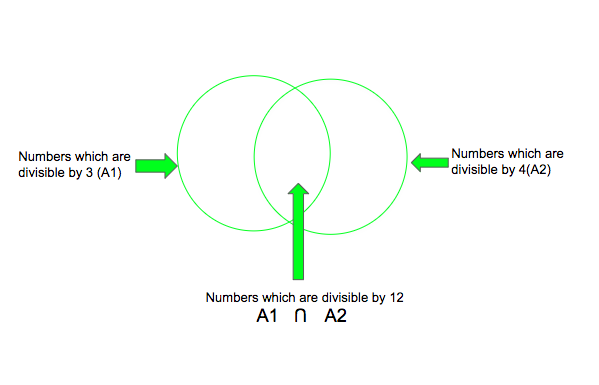 Problem 2: Given N prime numbers and a number M, find out how many numbers from 1 to M are divisible by any of the N given prime numbers.

The approach for this problem will be to generate all the possible combinations of numbers using N prime numbers using power set in 2N. For each of the given prime numbers Pi among N, it has M/Pi multiples. Suppose M=10, and we are given with 3 prime numbers(2, 3, 5), then the total count of multiples when we do 10/2 + 10/3 + 10/5 is 11. Since we are counting 6 and 10 twice, the count of multiples in range 1-M comes 11. Using inclusion-exclusion principle, we can get the correct number of multiples. The inclusion-exclusion principle for three terms can be described as: 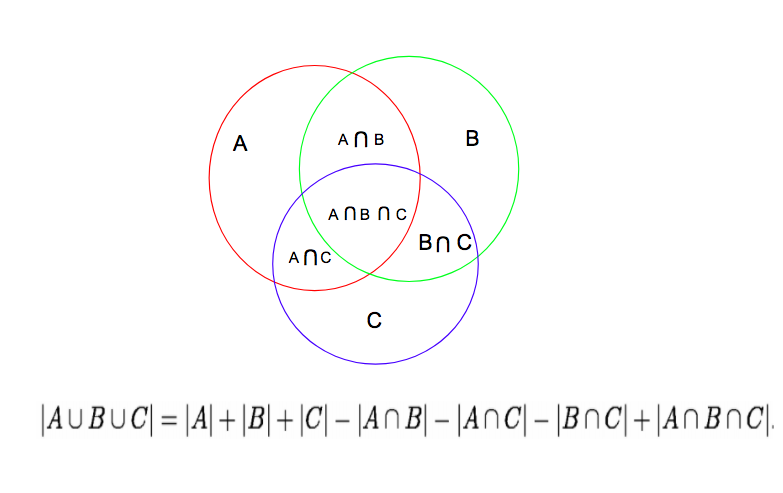 Similarly, for every N numbers, we can easily find the total number of multiples in range 1 to M by applying the formula for an intersection of N numbers. The numbers that are formed by multiplication of an odd number of prime numbers will be added and the numbers formed by multiplication of even numbers will thus be subtracted to get the total number of multiples in the range 1 to M.

Below is the implementation of the above idea: