A Django template is a text document or a Python string marked-up using the Django template language. Django being a powerful Batteries included framework provides convenience to rendering data in a template. Django templates not only allow passing data from view to template, but also provides some limited features of programming such as variables, for loops, comments, extends, include etc.
This article revolves about how to use include tag in Templates. include tag loads a template and renders it with the current context. This is a way of “including” other templates within a template. The template name can either be a variable or a hard-coded (quoted) string, in either single or double quotes.

Normally the template name is relative to the template loader’s root directory. A string argument may also be a relative path starting with ./ or ../ as described in the extends tag.

Illustration of How to use include tag in Django templates using an Example. Consider a project named geeksforgeeks having an app named geeks.

Now create a view through which we will access the template,
In geeks/views.py,

Now we will create three templates to demonstrate include tag. Create a base template in geeks.html, 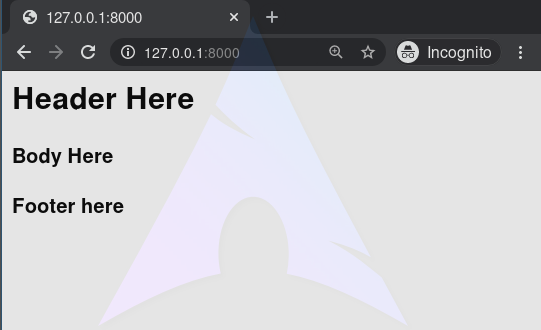 one can pass additional context to the template using keyword arguments: