The McCulloch-Pitts neural model, which was the earliest ANN model, has only two types of inputs — Excitatory and Inhibitory. The excitatory inputs have weights of positive magnitude and the inhibitory weights have weights of negative magnitude. The inputs of the McCulloch-Pitts neuron could be either 0 or 1. It has a threshold function as an activation function. So, the output signal yout is 1 if the input ysum is greater than or equal to a given threshold value, else 0. The diagrammatic representation of the model is as follows:

Simple McCulloch-Pitts neurons can be used to design logical operations. For that purpose, the connection weights need to be correctly decided along with the threshold function (rather than the threshold value of the activation function). For better understanding purpose, let me consider an example:

John carries an umbrella if it is sunny or if it is raining. There are four given situations. I need to decide when John will carry the umbrella. The situations are as follows:

To analyse the situations using the McCulloch-Pitts neural model, I can consider the  input signals as follows:

Truth Table for this case will be:

Rosenblatt’s perceptron is built around the McCulloch-Pitts neural model. The diagrammatic representation is as follows: 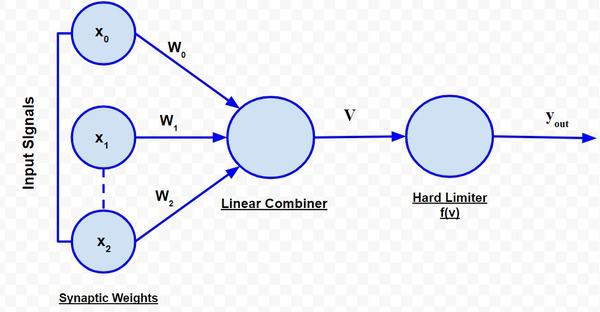 However, perceptron includes an adjustable value or bias as an additional weight w0. This additional weight is attached to a dummy input x0, which is assigned a value of 1. This consideration modifies the above equation to:

The output is decided by the expression:

The objective of the perceptron is o classify a set of inputs into two classes c1 and c2. This can be done using a very simple decision rule – assign the inputs to c1 if the output of the perceptron i.e. yout is +1 and c2 if yout is -1. So for an n-dimensional signal space i.e. a space for ‘n’ input signals, the simplest form of perceptron will have two decision regions, resembling two classes, separated by a hyperplane defined by:

Therefore, the two input signals denoted by the variables x1 and x2, the decision boundary is a straight line of the form:

So, for a perceptron having the values of synaptic weights w0,w1 and w2 as -2, 1/2 and 1/4, respectively. The linear decision boundary will be of the form: 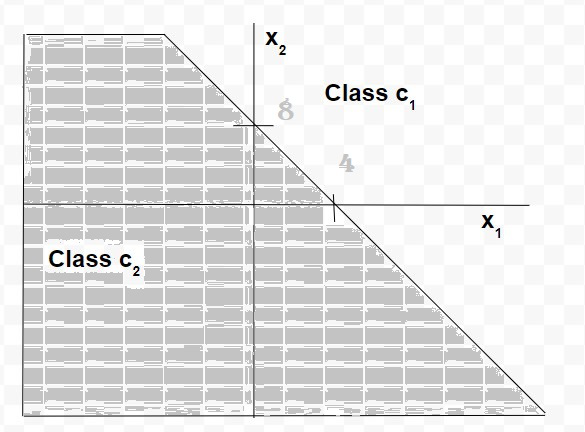 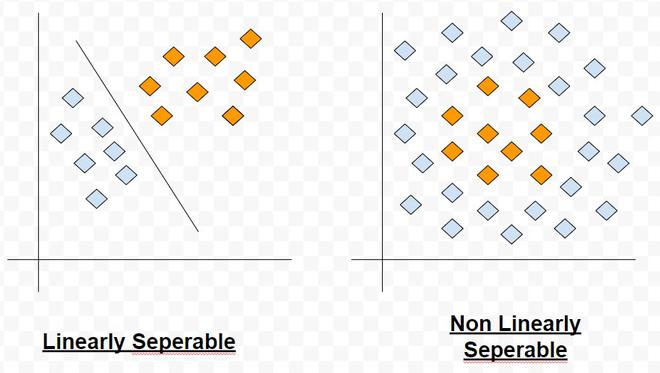 Multi-layer perceptron: A basic perceptron works very successfully for data sets which possess linearly separable patterns. However, in practical situations, that is an ideal situation to have. This was exactly the point driven by Minsky and Papert in their work in 1969. They showed that a basic perceptron is not able to learn to compute even a simple 2 bit XOR. So, let us understand the reason.

Classification with two decision lines in the XOR function output

This is the philosophy used to design the multi-layer perceptron model. The major highlights of this model are as follows:

Adaptive Linear Neural Element (ADALINE) is an early single-layer ANN developed by Professor Bernard Widrow of Stanford University. As depicted in the below diagram, it has only output neurons. The output value can be +1 or -1. A bias input x0 (where x0 =1) having a weight w0 is added. The activation function is such that if weighted sum is positive or 0, the output is 1, else it is -1. Formally I can say that,

The supervised learning algorithm adopted by ADALINE network is known as Least Mean Square (LMS) or DELTA Rule. A network combining a number of ADALINE is termed as MADALINE (many ADALINE). MEADALINE networks can be used to solve problems related to non-linear separability.