Image Recognition plays an important role in many fields like medical disease analysis, and many more. In this article, we will mainly focus on how to Recognize the given image, what is being displayed. We are assuming to have a pre-knowledge of Tensorflow, Keras, Python, MachineLearning

Also, we will be using Colaboratory as our notebook to run python codes and train our models.

1) At first we have to open Colaboratory and link our Gmail Account to it.

Now at first we will import all the requirements in the notebook and then load our image to be recognised.

2) To load the image in the notebook, we have to first add an image file to the folder and then pass its path to any variable (let it be FileName as of now) as:

Now to display this image we have to load it in our TensorFlow model which can be done using the image library which is present in tensorflow.keras.preprocessing. This library is used to load the image in our model, and then we can print it to display the image as shown below:

In the above method image is displayed in RGB and pixels format by default. So we will be using matplotlib.pyplot to plot our image using coordinates and to get a visualised form of our image in a better way.

The method in lib of matplotlib.pyplot is imshow( image_Variable ) which is used to display image clearly.Hence,

Hence, some of the features we had loaded our image which we are going to recognize.

3) Now we are going to use a pre-trained model which is used to test our predictions on image.

Since there is a large collection of models in tensorflow.keras.applications, so we can use any model to predict the image. Here we will be using mobilenet_v2 model.

Mobilenet_v2 is the 2nd version model of Mobilenet series(although there are many other versions). These models are making use of CNN(Convolutional neural networks) for predicting the features of the images like what is the shape of the object present and what is it matched with.

Since the images can be seen as a matrix of pixels and each pixel describes some of features of the image, so these technologies uses filters to filter out certain set of pixels in the images and results in the formation of output predictions about images.

CNN uses lot of pre-defined and stored filters and does a convolution (X) of that filter with the pixels matrix of the image. This results in filtering the image’s objects and comparing them with a large set of pre-defined objects to identify a match between them. Hence in this way these models are able to predict the image. 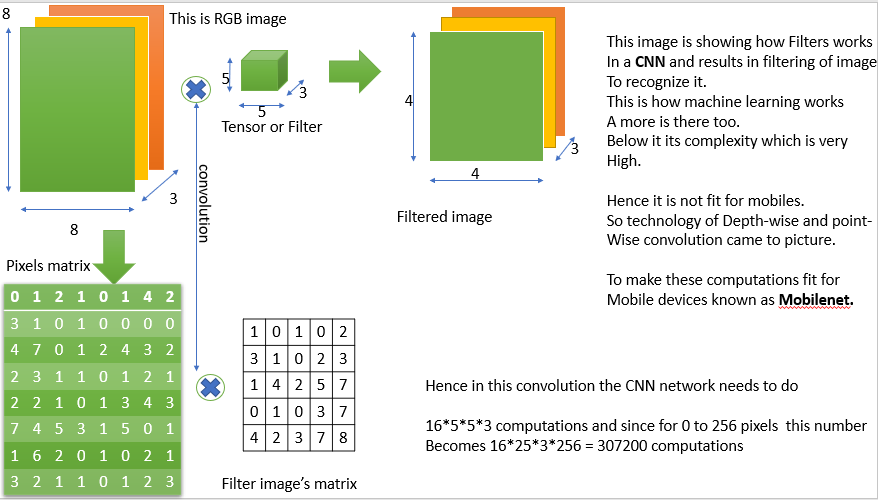 But these technologies requires a high GPU to increase the comparison rate between millions of data which cannot be provided by any mobile device.

Hence, here comes in action what is known as MobileNet. 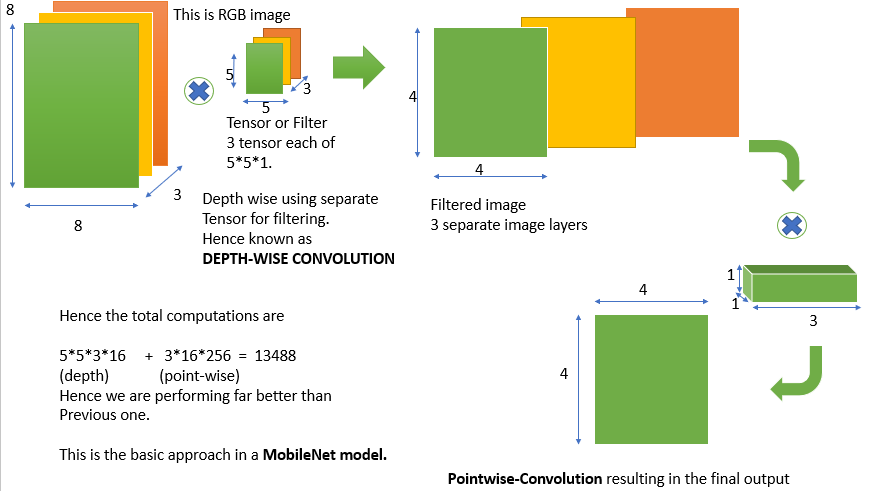 Enhancement over the the previous idea

So to import this model in a variable in the model we write the code as :

We are now going to feed our loaded image to it in a form of an array, so to convert the image to the array we will use the image library (discussed above) whose method named img_to_array() as given:

Now we are using preprocess_input() and predict() method of our trained dataset to predict image details.

4) Now since the predictions are made, so to display them we have to decode them. To decode them we will be using imagenet_utils. This library is used to decode and make many changes to array images.

A method named decode_predictions( ) is used to decode the predictions made to human-readable format.

Hence, the overall code of the prediction looks like this:

We can see the output is containing the name of the bird in the image and the pixels where it is located.

Hence, we had used Machine Learning Models and Python to Recognize the image of a bird with notebooks.