If we ask to imagine a picture of a programmer then what would be your answer? Close your eyes for 30 seconds and think about it…What’s your answer? 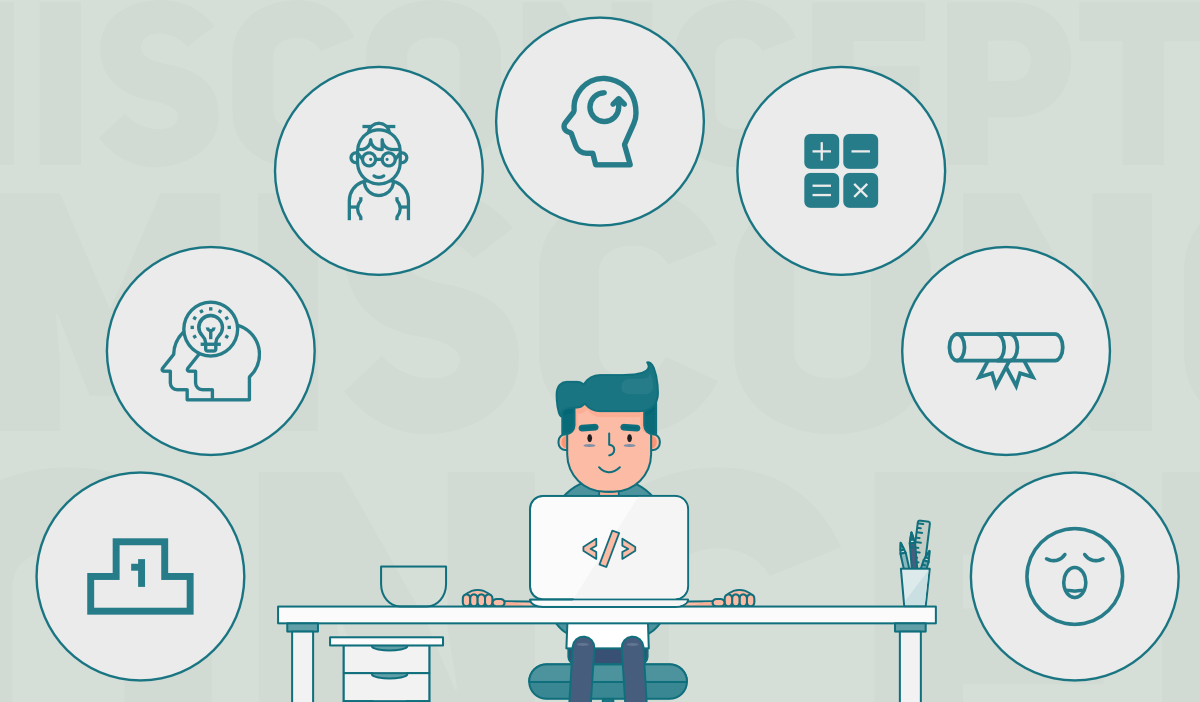 1. I Have to be Good at Mathematics to Learn Programming

A lot of people hesitate to come into programming because they think that they need to be a good mathematician to become a programmer. The fact is… someone’s mathematical skill is not directly proportional to their programming skills. People who write code don’t spend hours calculating or writing some maths formulas. You can still become a good programmer even if you just know basic algebra and statistics.
You should have problem-solving, analytical, and logical thinking ability to learn to program and it has nothing to do with solving complex mathematical problems. Being good in maths can be a plus point but you can not judge someone’s skill in programming based on their mathematical skill. To solve your mathematical problem in programming there are tons of libraries and plugins available which you can directly use in your code. There are some areas in programming like AutoCAD, financial analyst, video games, creating an algorithm or dealing with PoV (point-of-view) angles, collision detection, or some projects (that require to be good at physics and computer graphics) then you are expected to be good at mathematics.

A lot of aspiring programmers don’t enter in computer programming because they think that those complex code that is written on a computer screen can be only handled by some genius person. People imagine a picture of programmers wearing a pair of glasses having an IQ higher than 160 and doing some weird stuff on their computer system. The truth is their brains or mental capacity is not different than other people living on this earth. You don’t have to be a genius to code, all you need is patience, determination, and interest in coding.

When you don’t know the language of a different country or state, you think that it’s hard, the same thing happens in programming. Programmers talk to the computers in a different language to complete a task. In 2002 Robert M Hauser published a paper titled “Meritocracy, Cognitive Ability, and the Sources of Occupational Success” where a survey also revealed that programmers range from an IQ of 95-128 with the majority being above average but none from his survey having genius-level IQ score (140+).

3. X is the Best Programming Language to Learn

This is one of the most common debate topics among newbies or experienced developers. You will find different opinions from different people. Most of the people suggest those languages which they love to use for their job, and they are comfortable to work with. The fact is there is no best programming language suitable for all the coding task. Choosing a language is completely depends on what kind of project you are working on and what you want to do with it. It may change depends on your needs.
For example, Python is good for beginners to start with because it’s much more readable, flexible and simple for beginners. If you are looking for a faster language then C++ is the best choice. For interactive software Javascript is better. So it’s not a good choice to choose a language for your application just because of its popularity. If the language can not fulfill your need for your current application then there is no benefit of using it at all. In the end, remember that programming language is just a tool to solve a problem so instead of getting involved in a debate about which language is superior, focus on your problem solving, analytical skills and choose a language you are comfortable with to fulfill your application needs.

When you picture a programmer you see an awkward nerd sitting in front of a computer busy in some boring and complex stuff. A lot of people have misconceptions that coding is boring and developers have no creative skills. The best thing about coding is that it teaches you the art of thinking. When you build something from scratch after a lot of struggle you realize how amazing and exciting an experience it was. The truth is engineers love to express their creativity through programming. They break some complex problems into small pieces and then they enjoy solving these chunks using different methods. They don’t get bored in trying different methods, different patterns, and solving complex problems.
Programming is the combination of art and science and a lot of people also say it’s like poetry. Do you think that creating something out of nothing can be boring…think again ??

You’re trying to take something that can be described in many, many sentences and pages of prose, but you can convert it into a couple of lines of poetry and you still get the essence, so it’s that compression. The best code is poetry.
-Satya Nadella

5. You Should Have a Degree to Enter in Programming

One of the common misconceptions among people has that you can’t become a programmer without a computer science degree. We need to tell you that a lot of tech giant companies such as Google, IBM, and Apple, no longer ask for employees to have a college degree. It’s true that a computer science degree speeds up your understanding of theories and concepts that help in picking up programming more easily but today a lot of resources are available on the internet that teaches you programming.

GeeksforGeeks, Khan Academy, Codecademy, and a lot of websites help in learning to code so it is not rocket science if you don’t have a computer science degree. A lot of communities like StackOverflow and StackExchange is also available for programmers to find out the solution for coding related problems. So anyone can use these resources smartly to enter into programming.

6. You Need to Memorize All the Syntax

In programming, concepts are more important than syntax and after some experience when you write the same code, again and again, you eventually start getting the syntax at your fingers. Once you get the concept, work on projects and take the help of google if you don’t know something. When you keep writing code, after some time you realize that your brain automatically starts getting syntax without putting effort to memorize it. In programming, you should know where to find the answer and how to use the online resources (StackOverflow, GeeksforGeeks, W3Schools, Mozilla developer network, etc.), libraries, tools, IDEs, text editors to avoid memorizing the things in programming.

The software industry is male-dominated and people firstly imagine a picture of a male when they are asked to remember something about coding. A lot of people think that to become a programmer you should be good at maths, science and you should be good at using logical and analytical skills which can not be handled by women. Well, we need to mention that the first programmer of the world, Ada Lovelace, was a woman.