Below mentioned is the structure of HCl: 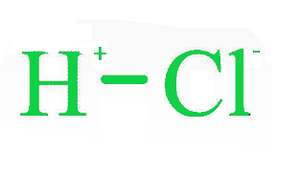 The industrial manufacture of hydrogen chloride is frequently integrated by creating fluorinated and chlorinated organic chemicals, such as Freon, Teflon, and other CFCs, and chloroacetic acid, PVC, and so on. The manufacture of hydrochloric acid is frequently combined with its captive on-site consumption. In the case of chemical reactions, hydrogen atoms on the hydrocarbon can be replaced by chlorine atoms, and the freed hydrogen atom recombines with the spare atom from the chlorine molecule to form hydrogen chloride. Fluorination is defined as the following reaction of chlorine-replacement that results in the production of hydrogen chloride, with the chemical reaction being as follows:

The resulting hydrogen chloride can be absorbed in water or reused immediately, yielding industrial or technical grade hydrochloric acid.

Question 1:  Which acid is used in the preparations of hydrogen chloride gas?

In the production of Hydrogen Chloride gas, concentrated sulfuric acid is employed.

Question 2: Give two examples of colourless gases that mix to form a white solid.

When hydrogen chloride and ammonia combine, they form a white solid.

Question 3: Why can’t dilute hydrochloric acid be concentrated by boiling beyond 22.2%?

It cannot be concentrated further than 22.2 percent by boiling because the molecules of dilute hydrochloric acid HCl (g) combine with water vapour.

Question 4: What are the physical properties of hydrogen chloride gas?

Question 5: How to convert Hydrochloric acid to nascent chlorine? Explain with a balanced equation.