Hydrogen bonding is an electrostatic dipole-to-dipole contact between molecules that shares certain covalent bonding characteristics. Hydrogen bonding is strong and directed, resulting in shorter interatomic distances and a small number of interaction partners. Its strength per mole of hydrogen bonds ranges from 4 kJ to 50 kJ. In hydrogen bonding, the interaction between a lone pair of an electron-rich donor atom, particularly second-row elements such as Nitrogen, Oxygen, and Fluorine, and the antibonding molecular orbital of a bond between hydrogen and a more electronegative atom or group is referred to as partial intermolecular bonding.

While hydrogen bonds contribute both electrostatically and covalently, the extent to which they do so is still debated. The current research suggests that the predominant contribution is covalent.

The bond pair of electrons in the O-H bond is quite close to the oxygen nucleus in this case (due to the large difference in the electronegativities of oxygen and hydrogen). As a result, the hydrogen atom generates a partial positive charge (+) whereas the oxygen atom develops a partial negative charge (-).

The electrostatic interaction between the hydrogen atom of one water molecule (with + charge) and the oxygen atom of another water molecule (with – charge) can now cause hydrogen bonding. As a result, hydrogen bonds are a unique type of intermolecular attractive force that only occurs when hydrogen atoms are bound to a highly electronegative atom. In comparison to typical dipole-dipole and dispersion forces, hydrogen bonds are primarily strong. They are, however, weaker than actual covalent or ionic connections.

Effects of Hydrogen Bonding on Elements 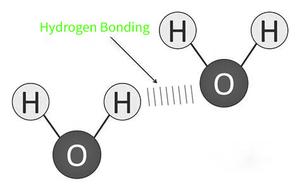 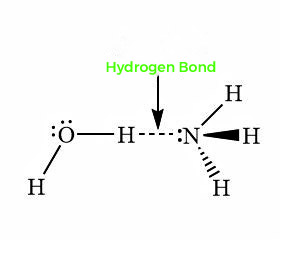 Strength of Hydrogen Bond: The hydrogen bond is a relatively weak one. Hydrogen bonds have a strength that is halfway between weak van der Waals forces and strong covalent bonds. The attraction of the shared pair of electrons, and hence the atom’s electronegativity, determines the hydrogen bond’s dissociation energy.

Why do hydrogen-bonded compounds have high melting and boiling points?

There are two types of H bonds, which are labelled as follows:

Atoms are most stable when their valence shells are filled with eight electrons, according to the octet rule. It is based on the observation that the atoms of the major group elements have a proclivity for chemical bonding in such a way that each atom in the resulting molecule has eight electrons in the valence shell. Only the core group elements are subject to the octet rule.

Question 2: What are the factors that affect the formation of Ionic Bond?

Factors affecting the formation of Ionic Bond are:-

Characteristics of Ionic Compounds are as follows:-

Question 4: What is Hydrogen Bonding?

When a hydrogen atom is coupled to a highly electronegative atom, the shared pair of electrons are attracted more by this atom, and the molecules’ negative end becomes slightly negative while the positive end becomes slightly positive.The negative end of one molecule attracts the positive end of the other, resulting in the formation of a weak bond. This connection is referred to as Hydrogen Bonding.

Question 5: What are the conditions required for Hydrogen Bonding?

Conditions required for Hydrogen Bonding are: