Hop Reservation Multiple Access (HRMA) Protocol is a Contention Based MAC Protocols with Reservation which is based on time slot-reservation protocol and every slot is given a separate channel frequency.

Handshake component is utilized for reservation to allow nodes sets to save a frequency hop, in this way giving collision free communication and maintaining a strategic distance from covered up terminal issue. After handshaking is done, two nodes communicate by sending data and ACKs on same frequency channels. It is also a multi channel MAC Protocols and it operates in simple half-duplex FHSS radio.

Features :
HRMA gives a pattern to offer QoS in ad-hoc systems dependent on simple half-duplex moderate FHSS radios. Numerical outcomes show that HRMA can accomplish a lot higher throughput than multichannel slotted ALOHA particularly when normal packet length is huge in contrasted with a slot size, in which case most extreme throughput of HRMA is near what can be acquired with a perfect protocol. 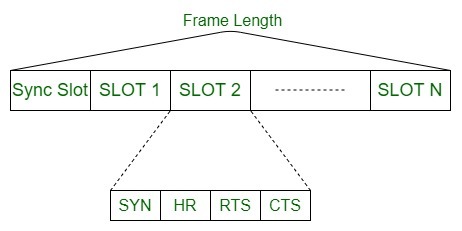