How to write code using module.exports in Node.js ?

module is a discrete program, contained in a single file in Node.js. They are tied to files with one module per file. module.exports is an object that the current module returns when it is “required” in another program or module.

We are going to see a simple code like the calculator to learn how to use module.exports in Node.js. I will walk you through step by step.

Step 1: Create two files “app.js” and “calculator.js” in your project folder. And initialize the project through npm in the terminal.

Step 2: Now we have a nodeJS based project with “app.js” as its entry point. Now let’s first code “calculator.js“. We will create a class named Calculator in it. It would have several member functions namely:

And at last, we export the Calculator Class through the module.exports 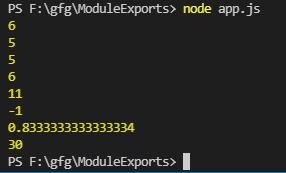 In this way, you can use module.exports in node.js. In place of class here you can pass any variable, literal, function, or object. And later import it by using require()