How to Use Twint OSINT Tool on Google Cloud Console ?

TWINT is an advanced Twitter scraping tool written in Python that allows for scraping Tweets from Twitter profiles without using Twitter’s API.

Twint utilizes Twitter’s search operators to let you scrape Tweets from specific users, scrape Tweets relating to certain topics, hashtags, and trends, or sort out sensitive information from tweets like e-mail and mobile phone numbers. It is very useful for gathering information.

How to use Twint on Google Could Console.

Step 1: Log into Google Cloud Console using any of your Google accounts and click on the icon shown below.

Note: If you are not using Google cloud console, then you need few things installed before you start using “Twint”. Those things can be installed by using the following commands :

Step 2: When the above requirements are fulfilled, run the following commands on the console to get started:

Step 3: Now we are ready to use it, so let’s use the following command, to see what this tool offers. 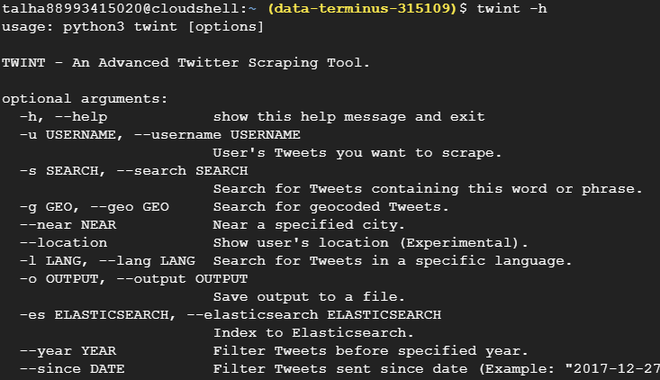 Fig3: Arguments we can use with Twint.

Step 4: Now, let’s use this tool on a user, say networkchuck for his last 20 tweets.

Note: Now  what this tool is doing is that,

Fig5: Highlighted words show that only tweets with raspberry pi are shown.

Step 6: Now, suppose you want to save tweets in a file, say rightnow.json, for this command will be,

There are various things you can do with this tool to gather information, so some examples to help you understand the basics are given below:-

To open-source intelligence researchers, Twitter is a giant rich database full of information anyone can use, and with a powerful tool like twint we discussed above, where one person can gather information about another just by scraping his/her tweets.