How to use routing in Vue.js ?

Vue router: Vue Router helps link between the browser’s URL/History and Vue’s components allowing for certain paths to render whatever view is associated with it. A vue router is used in building single-page applications (SPA).

The vue-router can be set up by default while creating your new project. In this article, we will install it separately. So we can see how it works. 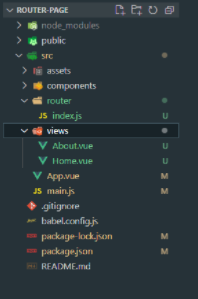 Now let’s add our new route to that application in our App.vue and index.js file. Before we add the new route we need to create our new component named Profile.vue in our views folder.

The <router-view> can be used to display the routing components based on the routes. When applied to an element in a template, makes that element a link that initiates the navigation to a route. Navigation opens one or more routed components in one or more <router-link> locations on the page. This means when we route to another view the application just hides some information and displays the requested information.

Step to run the application: Run the server using the following command.

Output: Open your browser and go to http://localhost:8080/ you will see the following output.

My Personal Notes arrow_drop_up
Previous
How to draw a bubble chart in react bootstrap ?
Next
How to draw a pie chart using react bootstrap ?
Recommended Articles
Page :
What is Routing and Nested Routing in Angular 9/8 ?
13, Aug 21
Adding Filters in VueJS
19, Nov 20
How to loop through a list of elements and display it in VueJS ?
10, Feb 21
Capitalizing a string using filters in VueJS
21, Feb 21
How to check given string is Palindrome or not using filter in VueJS ?
22, Feb 21
How to convert a normal string to a uppercase string using filter in VueJS ?
22, Feb 21
Building a Shopping List with VueJS
30, May 21
How to check an image is loaded or not in VueJS ?
23, Jul 21
What is the difference between created and mounted event in VueJS?
06, Aug 20
Difference between VueJS and AngularJS
20, Sep 19
How to Use Routing with React Navigation in React Native ?
02, Aug 21
Routing in Angular JS using Angular UI Router
16, May 18
Routing in Node.js
26, Jul 19
Routing Path for ExpressJS
23, Aug 19
Laravel | Routing Basics
31, Oct 19
Vue.js | Routing
15, May 20
How to enable routing and navigation between component pages in Angular 8 ?
26, May 20
How to put an image as background under multiple components in ReactJS with React Routing?
18, Jan 21
How to setup 404 page in angular routing ?
25, May 21
Routing in Angular 9/10
17, Jun 21
How to create module with Routing in Angular 9 ?
05, Aug 21
Flask App Routing
25, Oct 21
How to setup 404 page in React Routing ?
04, Nov 21
How is React Router is different from conventional routing ?
21, Mar 22
Article Contributed By :