How to use Pandas filter with IQR?

The IQR or Inter Quartile Range is a statistical measure used to measure the variability in a given data. In naive terms, it tells us inside what range the bulk of our data lies. It can be calculated by taking the difference between the third quartile and the first quartile within a dataset.

In this article, we will be knowing how to filter a dataset using Pandas with the help of IQR.

The Inter Quartile Range (IQR) is a methodology that is generally used to filter outliers in a dataset. Outliers are extreme values that lie far from the regular observations that can possibly be got generated because of variability in measurement or experimental error. Many a time we want to identify these outliers and filter them out to reduce errors. Here, we will be showing an example to detect outliers and filter them out using Pandas in Python programming language.

Let’s first begin by importing important libraries that we will require to identify and filter the outliers.

Now, we will read the dataset in which we want to detect and filter outliers. The dataset can be downloaded from https://tinyurl.com/gfgdata. It can be done using the read_csv() method present in the Pandas library and can be written as:

We can print the dataset to have a look at the data. 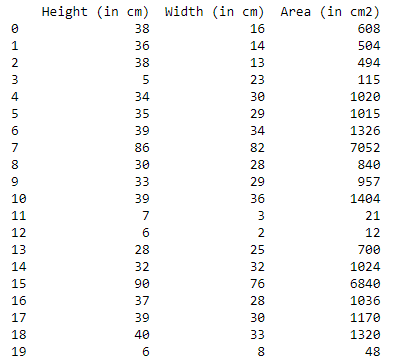 We can observe some statistical information about this dataset using data.describe() method, which can be done as: 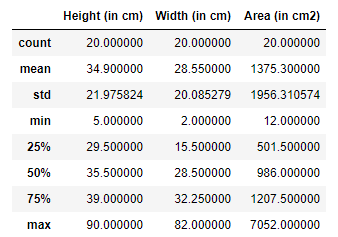 It can be observed that features such as ‘Height’, ‘Width’, ‘Area’ have very deferred maximum value as compared to the 75% value, thus we can say there are certain observations that act as outliers in the dataset. Similarly, the minimum value in these columns differs greatly from the 25% value, so it signifies the presence of outliers.

It can be verified by plotting a box plot of the above features, here I’m plotting the box plot for the Height column and in the same manner box plot for other features can be plotted. 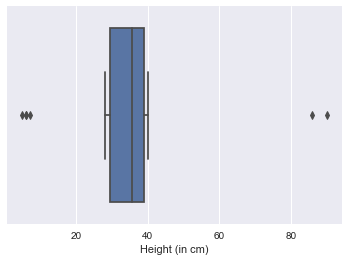 We can observe the presence of outliers beyond the first quartile and the third quartile in the box plot.

To find out and filter such outliers in the dataset we will create a custom function that will help us remove outliers. In the function, we first need to find out the IQR value that can be calculated by finding the difference between the third and first quartile values. Secondly, we will write a query to select observations that lie outside the lower_range and upper_range IQR region and remove them. It can be written as:

Printing the data afterward we can notice two of our extreme observations which were acting as outliers get removed. 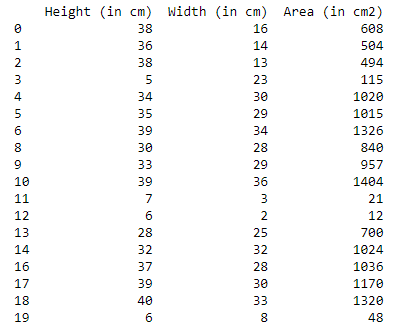 We can observe the rows with index numbers 7 and 15 got removed from the original dataset.

My Personal Notes arrow_drop_up
Next
Python | Pandas dataframe.quantile()
Recommended Articles
Page :
How to Use “NOT IN” Filter in Pandas?
20, Nov 21
Spatial Filters - Averaging filter and Median filter in Image Processing
02, May 20
Python | Pandas dataframe.filter()
19, Nov 18
Python | Pandas Series.filter()
13, Feb 19
How to Filter and save the data as new files in Excel with Python Pandas?
27, May 20
Filter words from a given Pandas series that contain atleast two vowels
22, Jul 20
How to Filter rows using Pandas Chaining?
22, Sep 20
Ways to filter Pandas DataFrame by column values
25, Sep 20
How to Filter Rows Based on Column Values with query function in Pandas?
10, Dec 20
How to Filter DataFrame Rows Based on the Date in Pandas?
22, Jan 21
How to Filter DataFrame Rows Based on the Date in Pandas?
09, Dec 20
Filter Pandas DataFrame by Time
23, Feb 21
Pandas filter a dataframe by the sum of rows or columns
14, Mar 21
Filter Pandas Dataframe with multiple conditions
16, Mar 21
Filter Pandas DataFrame Based on Index
16, Mar 22
Use of nonlocal vs use of global keyword in Python
10, Mar 20
Use Pandas to Calculate Statistics in Python
05, Jul 20
How to use Hierarchical Indexes with Pandas ?
04, May 21
Use of na_values parameter in read_csv() function of Pandas in Python
20, Jul 20
How to Use Pandas apply() inplace?
25, Nov 21
How to Use axis=0 and axis=1 in Pandas?
16, Dec 21
How to use pandas cut() and qcut()?
02, Jun 20
Python | pandas.to_markdown() in Pandas
02, Apr 20
Add a Pandas series to another Pandas series
14, Jul 20
Article Contributed By :