How to Use Nmap Script Engine (NSE) Scripts in Linux?

Nmap or Network Mapper is an open-source tool that is used to discover hosts and services on a computer network. It is one of the most powerful and flexible port scanners ever built. To install Nmap on any OS such as Ubuntu or Kali Linux you can use the command. It is highly flexible due to the availability of many NSE scripts available. NSE stands for Nmap Scripting Engine.  To understand the concepts of Nmap and NSE let’s take an example. For this task, we will be using a vulnerable machine called metasploitable2. It is highly vulnerable in nature. There are several phases for hacking and one of the most important steps is port scanning. Now to scan metasploitable2 we need a port scanning tool in this case we are using Nmap.

1. We can discover all the connected devices in the network using the command

2. The output of netdiscover show’s that VMware Inc mac vendor which is our metasploitable 2 machines. Now we can start a Nmap scan. The Nmap command shown here is:

3. The result obtained denotes the service and version running on metasploitable2 but what if we want more information gathering about the target. This is where NSE is useful. NSE allows users to write simple scripts to automate a wide variety of networking tasks. Those scripts are then executed in parallel with the speed and efficiency.  NSE scripts are written in a programming language called Lua.

4. In order to use NSE scripts we use the flag -sC, or we can use –script to run custom scripts. 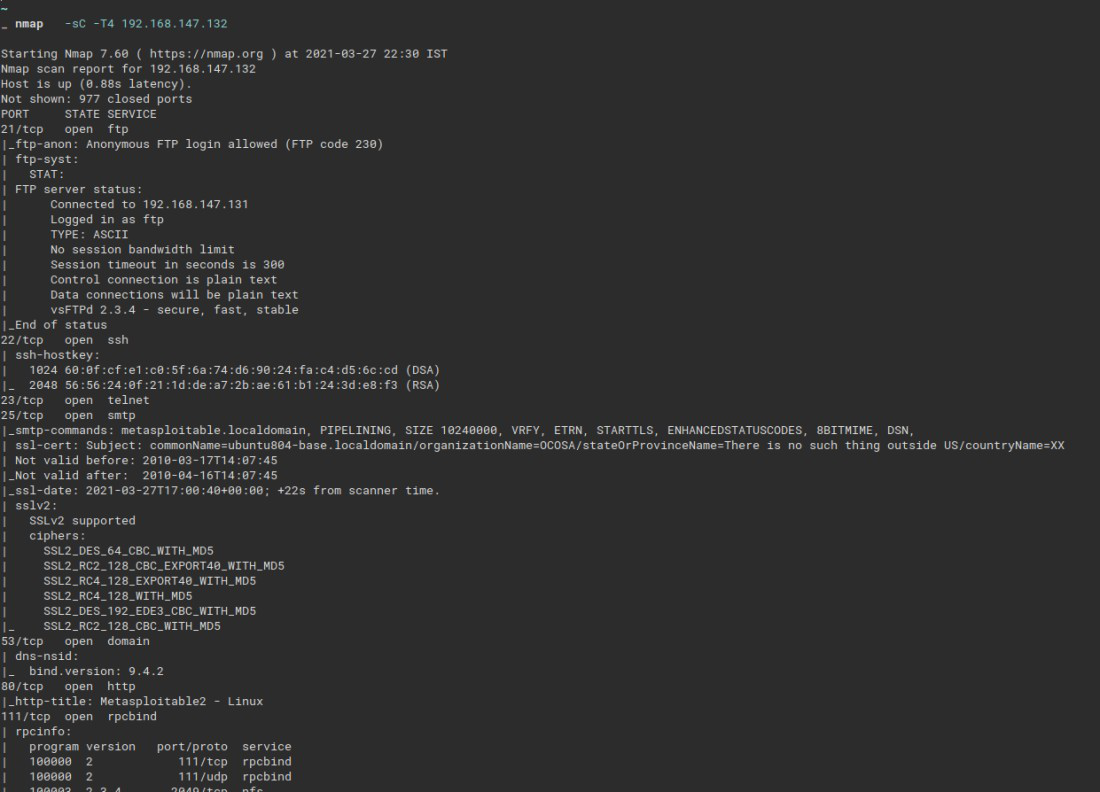 5. The Nmap command for default service scan is

6. Now if we compare the results of service version scan(-sV) and default scripts scans there are a lot of differences. Let’s take the case of port 21 (FTP). In the case of service version scan, we get only the version. In the case of script scan, it detected that anonymous login is also allowed and the script written in lua tried to login anonymously to verify if it’s possible. The problem with script scans is they can sometimes be intrusive in nature. This means the script is trying to engage directly with the target and also firewalls and IDS may block your request but Nmap is so powerful that it can perform scans by bypassing filters. -sC is equivalent to –script=default.

8. The scripts of nmap are located at /usr/share/nmap/scripts/ . There are more than 600 NSE scripts available for different ports created by the open-source community. You can update the NSE scripts by using the following command:

To check for all available scripts for a port.

10. ftp-anon.nse is the NSE script used to detect anonymous login in FTP servers. This script is part of the default scripts for port 21. That’s the reason we obtained the anonymous login allowed result while using -sC flag. 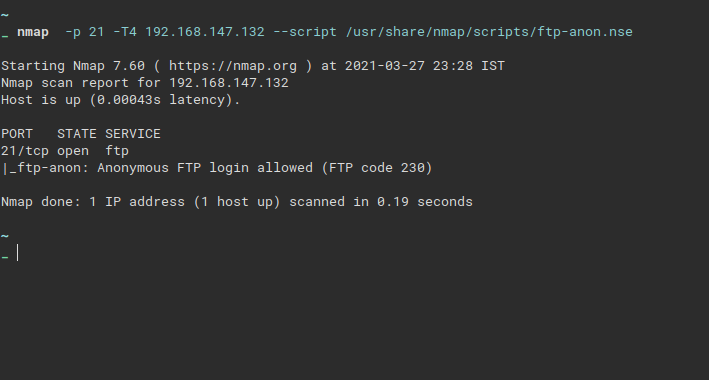 11. The Nmap scripts are so powerful that they can help you pwn a shell on a target machine.

12. We can see that Nmap just by running a script it was able to identify a command injection or RCE ( Remote Code Execution) on the target machine. Nmap tried to execute the ID command and the result returned as a command executed by the root user. Hence, Nmap confirmed the existence of a command injection bug. So many scripts in Nmap support passing arguments. We can also get a reverse shell just by Nmap NSE scripts, but we need to know about how to pass or how to use the scripts for this function Nmap provides a help option.

13. From the help menu we know that we can edit the ftp-vsftpd-backdoor.nse script and change the default command to the desired Linux command to get a reverse shell.

Executing the Nmap script we got a reverse shell on our attack machine.

15. To listen to a port using nmap

where, -lp stands for listening on port 1234

Executing the command hostname && id to verify the machine

16. You can also run all the scripts for a particular port by “theportname-* ”

In this case we are scanning port 21 which is ftp so in place of scripts we pass “ftp-*” as the argument.