When we build projects in C/C++, we have dependencies among files. For example, there might be a file a.c that calls a function from b.c. So we must compile b.c before a.c. There might be many dependencies in a project and manually following these dependencies and compiling files one by one becomes difficult. In this article, we are going to see how make utility can help us in making this simple. First we need to create 4 files in which 2 of them are .c files and 1 header ( .h ) file and 1 make ( .mk ) file.
Let us name the files as client.c and server.c and server.h and makefile.mk

Makefile is a set of commands (similar to terminal commands) with variable names and targets to create object file and to remove them. In a single make file we can create multiple targets to compile and to remove object, binary files. You can compile your project (program) any number of times by using Makefile. The main idea of this file is to specify the dependencies.

make utility : This is a command line utility and used to process the instructions written in the Makefile.

Here we write the client.c file

This is the client.c file which contains two header files one is #include”stdio.h” and the other is #include”server.h” file and remember this is the same file that we have created in the beginning and this contains main function which contains the printf statement which prints as “hey there, welcome to” (without quotes) and the main functions also calls the other user defined function which is greetings() .

Now we write the server.c file

In this server.c which includes the two header files one is #include”stdio.h” and the other is #include”server.h” file and remember this is the same file that we have created in the beginning and this contains user defined greetings function which contains the printf statement which prints as “geeksforgeeks !” (without quotes).
Now we write the server.h file

Now read this carefully here i will show you how to write makefile,
This is in windows so the object file is “a” if you are using the Linux, you replace “a” by “a.out”(without quotes)
See the first line of the code in that “a” represents the object file which contains all the code that we wrote till now, after “a” there are two more object file they are client.o and server.o these are the object files which are required to make the object file “a”, in the next line there is gcc command remember this there should be 1 Tab space before writing the gcc command( if you forgot to put the tab this program will not run), the gcc command compiles the files given to it and stores in the name of its object files.
This is easily understood like here,

Other way to remember is
food: food items
making food

Now lets move to the third line here the client.o is needed(because this is used in first line of code)so the pre-requisits for that file are client.o and server.h file the gcc command will compile the client.c to get the client.o file.

Now will see how to run the make file.

// This is used to run the makefile
make -f makefile.mk

This is the syntax to run the makefile after typing this press enter the code will compile and that will create an executable file named “a” (in windows), “a.out”(in linux).

// Remember this should be done only after the makefile command is executed
// This in windows
a
//this in linux
./a.out 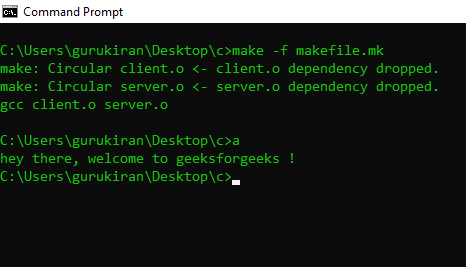 How does make utility work internally? It creates a dependency graph of tasks and uses Topological Sorting algorithm to find a valid sequence that follows all of the given dependencies.