How to Use Dagger Library in Android App?

When we create a new Android Project, eventually we start accumulating different-different dependencies to get certain functionalities, but over time managing them becomes cumbersome, thus an injection framework like Dagger comes into play. However, setting up an injection service like Dagger requires much amount of boilerplate code and has a very steep learning curve. Originally adding raw dependency/version of Dagger without Android Support is a nightmare.

But….. Then comes Dagger-Android, which changes this game and satisfies everything which raw Dagger lacked, like reduced pre-made (boiler-plate) code, still it wasn’t successful. In this article, we are going to understand the following by building a simple project.

We are going to build a very simple app in which we will display text. But we are going to do this by using constructor dependency Injection.

Copy the following Dagger dependencies and paste them into your App-level build.gradle file.

Keep using the latest dagger version, you can get it from here.

Now in the MainActivity,

What is a Dependency?

For creating a car object whose constructor has arguments, we must pass those arguments (engine and wheel ). while creating the car object. For that, we have to create objects of Wheel and Engine which creates messy boilerplate/reusable code and is a very tedious process. To avoid these we can use Dagger Dependency Injection.

Make a CarComponent Interface and add @Component Annotation to it. The @Component annotation just tells the compiler that this interface is going to be the Component for the car object.

Add @Inject annotation for the constructor of all the classes (Car, Engine, Wheel ).

Don’t forget to Rebuild the project after Step 8 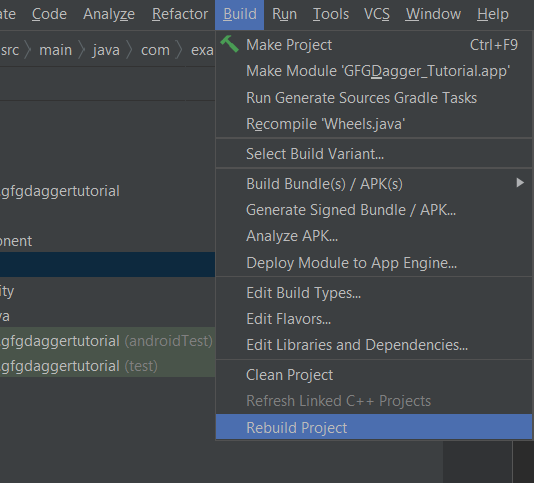