How to Setup Sublime Text 3 for Java in Windows?

Java is one of the most popular and widely-used object-oriented programming languages. Java syntax is similar to C/C++. But Java does not provide low-level programming functionalities like pointers. Also, Java codes are always written in the form of classes and objects. The Java codes are first compiled into byte code (machine-independent code). Then the byte code is run on Java Virtual Machine (JVM) regardless of the underlying architecture. Written by a Google engineer sublime text is a cross-platform IDE developed in C++ and Python. It has basic built-in support for Python. Sublime text is fast and you can customize this editor as per your need to create a full-fledged Python development environment. You can install packages such as debugging, auto-completion, code linting, etc. There are also various packages for scientific development, Django, Flask, and so on.

Setting Up sublime-build (for showing output below)

After the installation process is over and we are done with the environment and build setup, we need to test whether our compiler and IDE working or not. For this we will write a simple output based program , save it as a .java file and then press Ctrl+B to build the project: 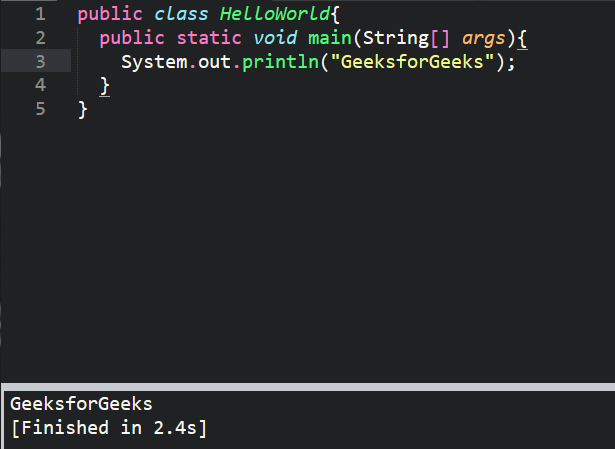