The task is to set content as a counter. The CSS counters area unit “variables” maintained by CSS whose values are also incremented by CSS rules (to track what variety of times they are used). Counters permit you to manage the appearance of content supported by its placement among the document.

CSS counters area units like “variables”. The variable values may be incremented by CSS rules (which can track what percentage times they’re used). To use a CSS counter, it should 1st be created with a counter-reset and to work with CSS counters we’ll use the subsequent properties:

A counter may be helpful to form printed lists as a result of a replacement instance of a counter is mechanically created in child parts.

Example 1: Here we tend to use the counters() perform to insert a string between completely different levels of nested counters: 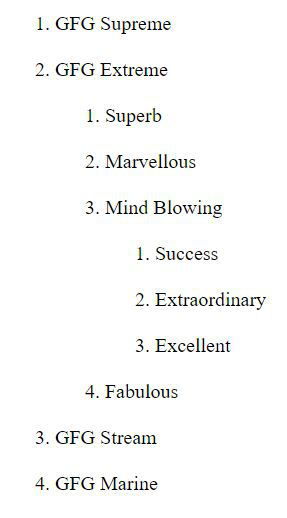 Example 2: This is an example of setting up a counter, here the value of the counter increases its value with one and connects it with the starting of each part:

Example 3: This is an example of setting up a counter, here the value of the counter increases its value with one and connects it with the starting of each part, and also it increases the value of subsection as well: 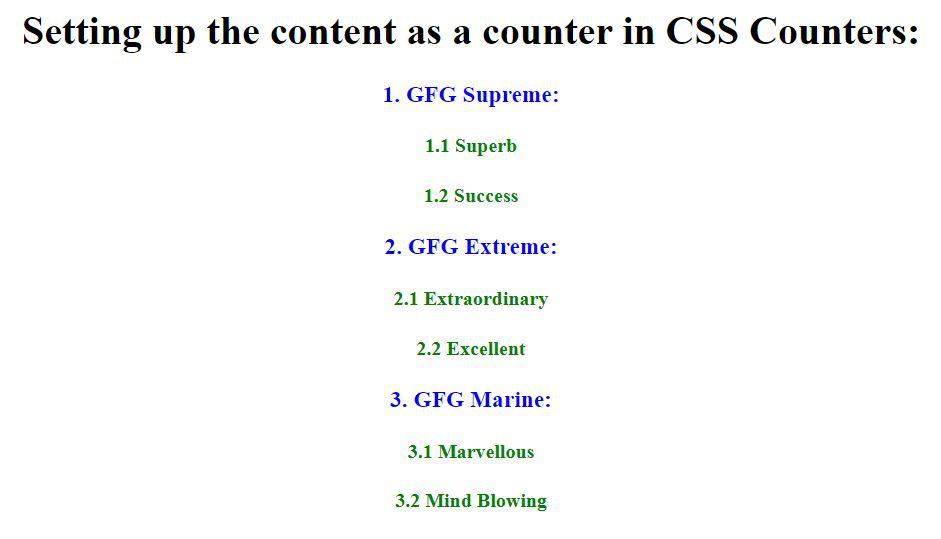 My Personal Notes arrow_drop_up
Previous
How to define the shape of the corners is animatable using CSS ?
Next
How does z-index layer work ?
Recommended Articles
Page :
Projecting Content into Components with ng-content
13, Aug 20
How to create a simple counter Using ReactJS?
05, Jan 21
How to make Incremental and Decremental counter using HTML, CSS and JavaScript?
24, Mar 21
How to Create Section Counter using HTML and CSS ?
27, Mar 20
CSS | counter-increment Property
15, Jan 19
CSS | counter-reset Property
06, Feb 19
jQuery | Set Content and Attributes
22, Feb 19
How to set cursor position in content-editable element using JavaScript ?
28, Nov 19
How to set alternate content for users that do not support client-side scripts ?
09, Jul 20
How to set the list-item marker appear inside the content flow in CSS ?
21, Apr 21
How to enable extra set of restrictions for content in an iframe element in HTML5 ?
13, Apr 21
How to set the background image start from the upper left corner of the content using CSS?
28, Apr 21
How to set default value to align content in CSS ?
09, May 21
How to set div width to fit content using CSS ?
21, Apr 20
Reading selected webpage content using Python Web Scraping
28, Apr 17
How flexible items can be of the same length regardless of its content in CSS ?
11, May 21
How content property is used with :after selector in CSS ?
15, Apr 21
How to make div height expand with its content using CSS ?
12, Feb 19
jQuery | Get Content and Attributes
22, Feb 19
HTML content modification using Javascript
18, Apr 19
How to clear the content of a div using JavaScript?
04, Apr 19
Adding HTML entities using CSS content
12, Apr 19
jQuery UI Tooltips content Option
18, Feb 21
HTML | <meta> content Attribute
29, Apr 19
Article Contributed By :