NodeJS is the runtime environment, which can execute the javascript code on any platform. It is widely used to create and run web application servers because of its salient features. During production, several times we need to send the resources or some type of information as a response, and javascript object notation (JSON) syntax is widely used to send data also it is used for communication between any two applications. In this article, we are going to see how we can send information to the user as JSON through a node.js server. NodeJS contains an inbuilt HTTP module, it is used to transfer data over the HTTP protocol and supports many features that are useful for any web application.

Write this command in your terminal and it will create a node application. This command will also ask for few configurations for this application which is quite simple to provide. As another option, you can use the -y flag after npm init for default configurations.

Step 2: Create a Javascript file and we are going to name it app.js you can name whatever you want. In this file, we will write our entire code.

Project structure: Now our directory structure will look like the following.

Step 3: Now we are going to create a backend server, more clearly creating a server is nothing but writing few lines of code and calling the inbuilt functions of nodejs. It just creates a runtime that executes javascript code on the machine.

Step 4: Create a Request Listener. Till step 3 we have successfully created a server but currently, the server will neither interact with us nor respond to our request. The reason is we have not created the request listeners yet. In this step we are going to create a request listener, this gets called every time someone hits on the server.

Step 5: Now we will send the response. The data will be sent along with the response object to the user.

Output: This is the JSON response of the request. If we open the network section of the chrome developers tool we will be able to see the actual response from the server. 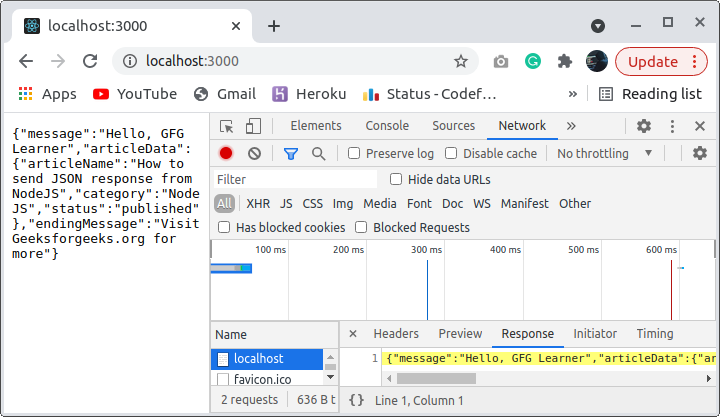 So that was all about sending responses as JSON from the NodeJS server.