How to run multiple Python file in a folder one after another?

We have created another folder named two. In which, test.sh exist. 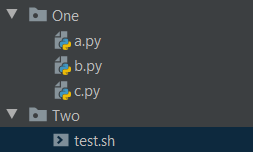 For running dynamically all the python program files in a given folder <FOLDER_NAME>, we can run a bash script file for doing this task. With the help of this above script, We can run all .py extension file which is located in the given folder path. With each iteration, This program will run every python file.

Run this command in Git Bash Terminal. We can use “./” (or any valid directory spec) before the filename:

If we want to run multiple python files from another folder using our command prompt. Then, we need to take the path of the files. As in folder One, We have created three files, and now we are in folder Two.

Simple command to run our python file within a folder:

But here, we are in another folder so, we need to take the path of the python file like below…

Now, Let see its implementation of how to run multiple files from another folder:

This discussed method is not effective one, because we can not write this complex command to run just few files.

With the help of os module, we can execute the script that can run our python files from another folder. First, We need to import the os module.

Inside os module, there is one method named system(). We will call our run script command an argument.

My Personal Notes arrow_drop_up
Previous
Find the nearest value and the index of NumPy Array
Next
Visualize data from CSV file in Python
Recommended Articles
Page :
How to merge multiple folders into one folder using Python ?
26, Apr 21
Python - Copy contents of one file to another file
17, Dec 20
Python - Copy all the content of one file to another file in uppercase
13, Oct 21
Import Modules From Another Folder in Python
17, Jun 21
How to read multiple text files from folder in Python?
01, Feb 21
Read content from one file and write it into another file
03, Jan 21
How to run same function on multiple threads in Python?
25, Mar 21
Python program to reverse the content of a file and store it in another file
15, Jan 20
Python - Append content of one text file to another
11, Jul 20
How to run Python script directly in Kivy file?
23, Feb 21
Python | OCR on All the Images present in a Folder Simultaneously
11, Nov 19
Apply changes to all the images in given folder - Using Python PIL
14, Nov 19
Python - Move all files from subfolders to main folder
03, Jun 21
How to get size of folder using Python?
01, Feb 21
How to Merge all excel files in a folder using Python?
13, May 21
Python - Copy Files From Subfolders to the Main folder
21, Jun 21
How to iterate through images in a folder Python?
26, Nov 21
Rename a folder of images using Tkinter
02, Jun 20
How to read all CSV files in a folder in Pandas?
16, Apr 21
Python - Call function from another file
24, Feb 20
How to import variables from another file in Python?
03, Mar 21
How to import a class from another file in Python ?
29, Apr 21
Python | Add one string to another
22, May 19
How to move all files from one directory to another using Python ?
17, Jun 21
Article Contributed By :