How to Recover a Deleted File in Linux?

We all have often faced a problem where we have accidentally deleted some files in Linux, that we definitely regretted deleting off later on after we did not even found it in the trash. But what if we can recover them? In this article, we will discuss How we can recover a Deleted File in Linux.

Whenever we delete something from our system, it does not actually get deleted, till that space gets overwritten by something else in the disk. You can also read about how to securely delete any files permanently.

The best way to Recover a Deleted File in Linux is as follows:

Unmounting a device immediately after we realize we’ve deleted important files is the best option to prevent the data blocks of the deleted files from being overwritten with other data.

Sometimes an open file is deleted accidentally, in that case, lsof command is a life-saving command to recover that file.

Step 1: Make a test file inside the /tmp directory

Step 2: Run something that will hold the file open:

Note: Here the number is 8561 but in your case, it might be different so use the commands accordingly.

Step 3: List the process for confirming the open process

Step 4: Manually just delete the file and try listing  the file, you will be shown an error message because it has been deleted

So now we are sure that the file is actually deleted, lets now try to recover it with the help of lsof command

Step 5: For displaying the open file descriptor of the process use lsof command

The PID of the process that is holding that file open is displayed in the second column.

Step 6: Now we have to locate the open file descriptor in /proc directory

Step 7: Now the open file (that was deleted but opened by some other process) can be copied back to its original location i.e., under /tmp. After that, you can also rename it by its original name

Now you are done recovering the file, that you thought to be lost forever.

Foremost is a forensic tool that comes more or less pre-installed in kali Linux but if it is not there, you can install it from the command line. The foremost tool is used to recover deleted files from hard disk, memory card, pen drive, etc.

For recovering a deleted image use the following command: 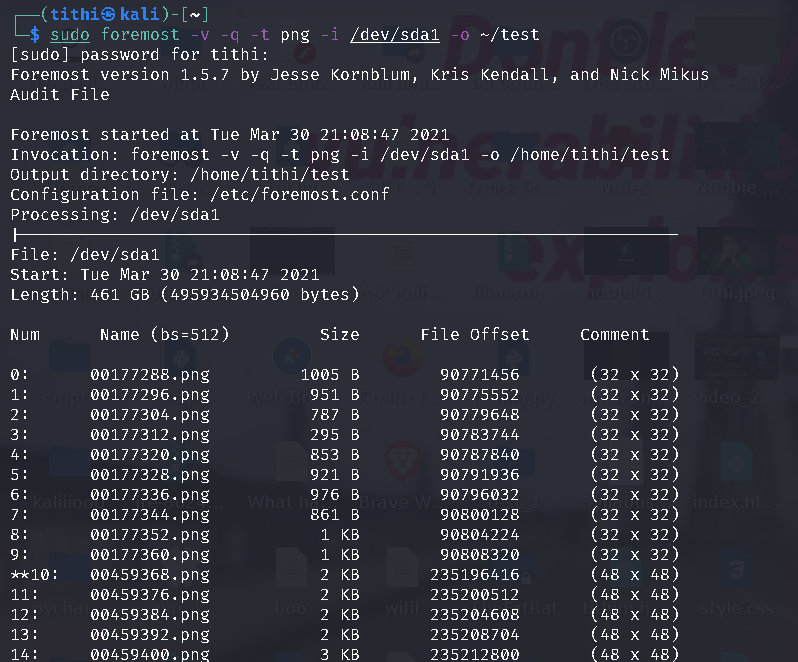 Where /dev/sda1 is the underlying partition where /boot resides.

where /home/tithi/Downloads/gg is a directory on a separate disk where the recovered file will be located(don’t recover the files on the same drive where the removed ones were located, it might fail to recover anything). A lot of files will be get recovered together and the recovered name file won’t be similar to the original one.

My Personal Notes arrow_drop_up
Previous
How to Find the Wi-Fi Password Using CMD in Windows?
Next
Comments in Shell Script
Recommended Articles
Page :
How to Recover Deleted Files Using Foremost in Linux?
15, Nov 20
Zydra - Recover Password Protected PDF, ZIP, and RAR
26, Feb 22
Linux Virtualization : Linux Containers (lxc)
29, Jun 16
Difference Between Arch Linux and Kali Linux
28, Jun 20
Neofetch In Linux – Snap cool screenshots of your Linux
24, Jun 22
Linux File Hierarchy Structure
24, May 17
proc file system in Linux
01, Apr 18
File globbing in Linux
15, Apr 18
file command in Linux with examples
18, Feb 19
How to copy a file's content from Linux terminal?
09, Jul 19
SetUID, SetGID, and Sticky Bits in Linux File Permissions
05, Aug 19
File Management in Linux
18, Feb 20
Fcrackzip Tool - Crack a Zip File Password in Kali Linux
16, May 21
Kali Linux - File Management
19, Jun 20
Advance File Permissions in Linux
01, Jul 20
Different Ways to Create File in Linux
04, Jan 21
Linux - Renaming File While Downloading with Wget
09, Feb 21
How to Create a Password Protected ZIP File in Linux?
22, Feb 21
How to Make File and Directory Undeletable Even By Root in Linux?
09, Feb 21
How to Find Linux File Creation Time using Debugfs?
06, Apr 21
How to Append Text to End of File in Linux?
05, Mar 21
How to Save Output of Command in a File in Linux?
15, Mar 21
How to Get Last Modified Date of File in Linux?
24, Mar 21
How to Use Gzip and Keep Original File in Linux?
06, Apr 21
Article Contributed By :