How to Push Git Branch to Remote?

Git is the most popular version control system which records the changes made to our project over time in a special database called a repository. We can look at our project and see who has made what changes when and why and if we screw something up we can easily revert our project back to an earlier state. In this article, we will see the essential commands for pushing a git branch to a remotely hosted repository or project you can say and what is the core meaning of these commands.

Key Terminologies are as follows:

So let us begin and see how to push a git branch to a remotely hosted repository as stepwise justified below as follows:

Here we can see, first of all, we ran a command “cd <path to the directory”. By default, you will be on your C drive but here we are working on a directory that is there in the E drive, so we have to run that command which is basically the command to change the directory.

Then you can see, we tried to run a git command “git status” with which we can see the current state of any git repository. But as it is a non-git repository it is giving us an error “not a git repository (or any of the parent directories): .git”. So to resolve this issue we have to initialize git in the directory first.

For that purpose, we ran the “git init” command with which we initialize git in a non-git repository. then the git stated to us that it initialized an empty git repository in the current directory and then if we run any git command it will not gonna throw this kind of error (as you can see in the next “git status” command).

So “git status” command is basically the command to know the current state of any existing git repository. In the previous explanation, you saw that by running the command “git status” we get this information from git:

Now we will create a file named “hello_world.cpp” in the directory and then if we run “git status” we will get something like this

so basically it is saying that you have a change in the directory that you created a file named “hello_world.cpp” and currently it is untracked.

So to track any change in an existing git repository we have to add it to the staging area and we can commit that change to push all the commits or you can say changes to a remotely hosted repository. For that, we ran the command “git add .”

now we added the changes to the staging area and let’s commit those changes.

To commit all changes which are there in the staging area we have a command “git commit -m “a commit message”.

Now we have to add a remote origin to tell git that whenever we want to push or pull anything for this current repository you have to do the operations from that remote origin only. So, let’s do that

To add a remote origin to an existing local repository first of all you have to create a repository in your GitHub account.

Step 1: First of all simply go to the repositories section in your GitHub account and create a new repo by simply clicking on new button 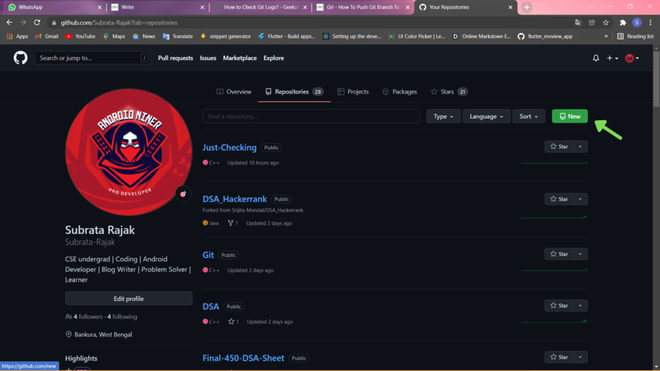 Step 2: Then Give a nice name to your repo which you just created and create the repo 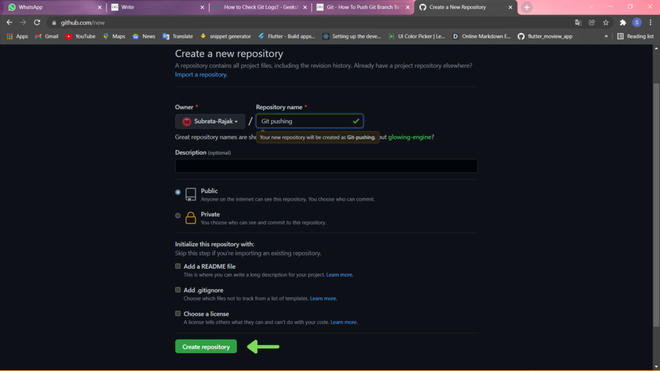 Create a new repo by clicking on create repository button

Step 3: Then simply copy the URL to the repo to add as origin in your local directory 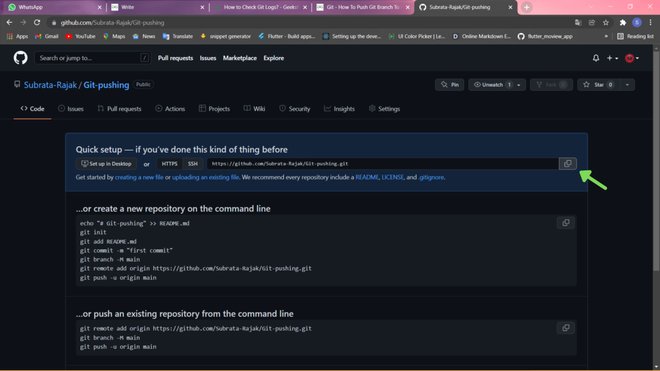 After executing the command you can simply check whether your remote origin is defined or not by the “git remote -v” command.

After pushing the changes the repo will look like and this is how you can push a branch to a remotely hosted GitHub repository. 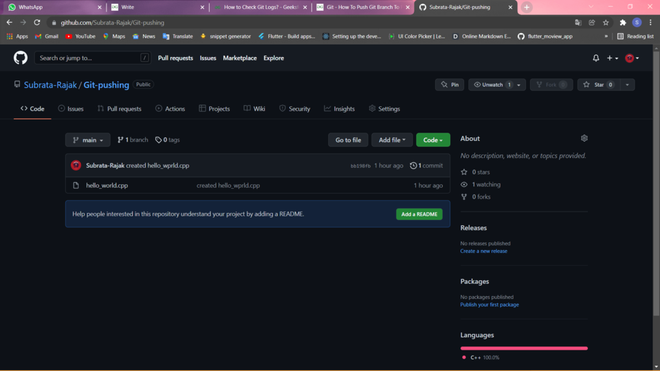 The repo after pushing changes 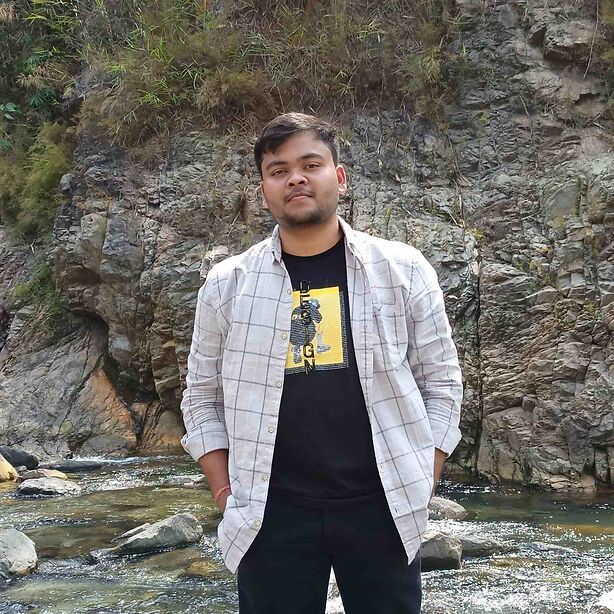