How to Make a Career in Automation Testing?

In today’s technology-driven world, almost every organization (whether it be a startup or any big tech giant) is trying to automate its core functioning or work processes for enhancing efficiency and productivity. Indeed, from Designing to Development or from Management tasks to Business Processes, Automation is setting up its space in almost every single domain. And in a similar context – here comes the Automation Testing domain!! Automation Testing is replacing the traditional Manual Testing practices by making the tedious testing tasks more efficient and convenient. And if you’re considering making a career in the Testing field, then Automation Testing will be a great move for you!! 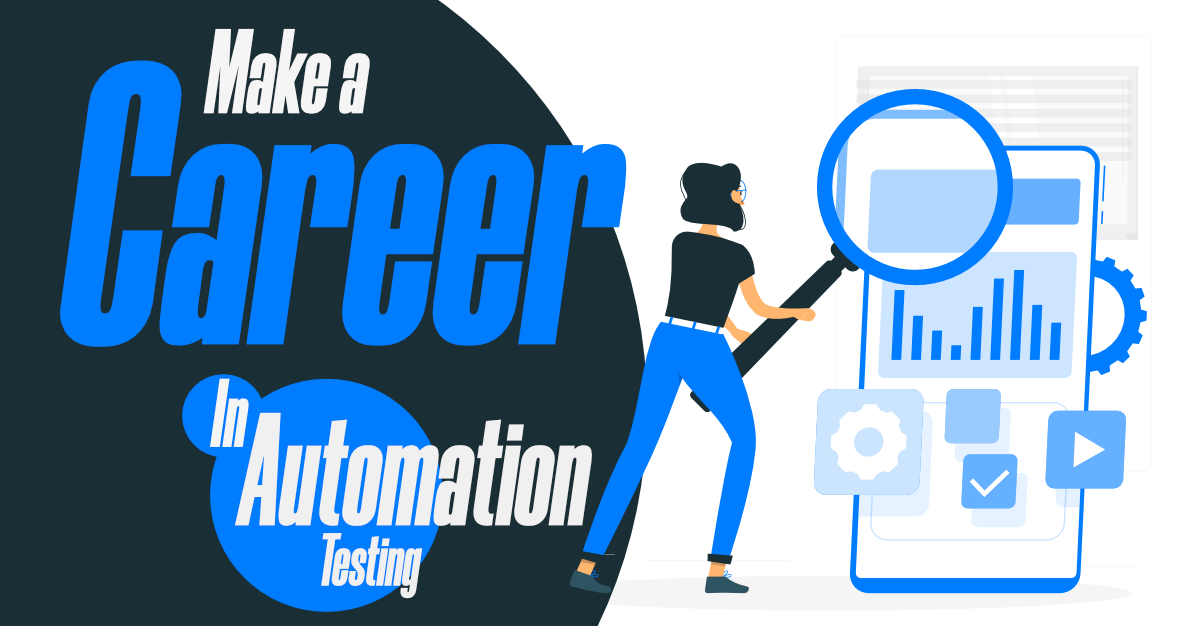 Before moving further, let’s have a brief introduction to – What is Automation Testing? So, Automation Testing is concerned with the process of using various tools and software to create test cases and their execution by considering pre-defined actions. In comparison with the Manual Testing process, Automation Testing offers numerous worthwhile benefits such as less time-consuming, better performance, less operational costs, scalability, and many more. Statistically, the Automation Testing market is all set to reach around $30 Billion by the year 2024 and the demand for highly skilled Automation Professionals is rising rapidly in the tech world. Furthermore, let’s take a look at several major roles & responsibilities of an Automation Tester in an organization:

Now, let’s get back to the main concern – How to make a career in Automation Testing? Meanwhile, there is not any strict eligibility criteria or academic requirement to get into the Automation Testing. However, if you’re having an academic background in a particular domain such as Bachelor’s or Master’s degree in Computer Science / Information Technology, etc., it’ll be quite helpful for you as it’ll not only make you familiar with the fundamentals and underlying mechanism of the particular field but will also help you to get some ravishing career opportunities. Moreover, if we talk about the technical skills or hands-on experience or anything else required for becoming an Automation Testing Professional, below we’ve provided a thorough roadmap that covers all the approaches to make a worthwhile career in Automation Testing:

1. Get Proficient with Programming Languages

If you’re considering that Coding or Programming skills are not essential for getting into Automation Testing then you’re entirely wrong!! Indeed, you’re required to have a sound knowledge of Programming Languages and the respective programming concepts. It will make you comfortable with various crucial jobs for Automation Testing such as Unit Testing, Task Automation, Code Review, and many more. Meanwhile, you can start with several most demanding programming languages such as C/C++, JAVA, Python, Perl, etc. and can learn these languages from various online or offline resources. Furthermore, you’re also recommended to get proficient with several prominent Operating Systems such as Linux, UNIX, etc. along with the respective tools & commands.

Okay, let’s move to another prominent technical skill that you need to possess for being a worthwhile Automation Testing Professional – understanding of SQL Queries and Databases. You’re required to be proficient with fundamental Structured Query Language (SQL) concepts such as Data Manipulation Language (DML), Data Definition Language (DDL), Transactional Control Language, Aggregate Functions, etc. along with the Database concepts and operations. Though you’re not required to have a deep understanding of all relational databases and you can start with Oracle, MySQL, etc. to understand the database management processes. Moreover, you’re also required to have familiarity with several data formats such as XML, JSON, etc to get more exposure in the Testing domain.

Now, let’s dive deeper into the ocean of Automation Testing – you’re required to understand various crucial and prerequisite Automation Testing concepts. First and foremost, you need to go through the Automation Testing Life Cycle (ATLC) concept and the respective processes. In general, ATLC is concerned with the structural testing process that comprises several stages for all the required activities for testing. The various phases of ATLC are as follows:

Along with ATLC, you’re required to focus on several additional concepts also such as Continuous Integration / Continuous Delivery for Testing, understanding of APIs, etc. for some advanced outlook in Automation Testing.

4. Get Familiar with Automation Testing Tools

Here comes the most crucial part while preparing yourself for getting into the Automation Testing domain – familiarity with Automation Testing tools!! You’re required to practice on these tools as much as you can and know about their functionalities, specifications, limitations, etc. to gain the utmost exposure. The hands-on experience with Automation Testing Tools will help you to get some in-depth knowledge of the testing domain that you might not get from reading theory or attending lectures. There are numerous Testing Automation tools such as Selenium, TestComplete, Appium, etc. that can be taken into consideration. Furthermore, apart from core automation testing tools, there are several other worthwhile tools as well for Defect Tracking, Test Management, and other crucial tasks.

5. Get Hands-on Experience on Manual Testing

Once you’ll get done with the above-mentioned skills and approaches, you can shortlist various Testing companies based on your preferences and can apply for internships programs or even for jobs as well to start your journey.  Moreover, apart from the technical skills, you’re strongly recommended to work upon several non-technical or soft skills as well required for making a successful career in Automation Testing. There are several skills such as Critical Thinking, Problem Solving, Collaboration, Effective Communication, Time Management, etc. that can surely be taken into consideration.

Now, let’s take a step forward and discuss several relevant and prominent certifications for Automation Testing that you can opt for to assess your skills & knowledge and for getting an edge over others during the recruitment. Some of the most-preferred certifications for Automation Testing are – ISTQB Test Automation Engineering Certification, Certified Software Testing Engineer (CSTE), ICAgile Certified Professional in Agile Test Automation (ICP-ATA), etc. Additionally, there are few most-recommended books provided below to help you in preparing for these certification exams and make your learning journey more convenient:

So, this is a complete roadmap that you need to follow to make a worthwhile career in Automation Testing. And yes, if you’ve already entered into the Testing profession or having a decent career in Manual Testing, you still can follow the above-mentioned approaches to switch over to the Automation Testing field. Indeed, Automation Testing has a remarkable growth and career scope for the individuals in the upcoming times!!

My Personal Notes arrow_drop_up
Previous
7 Best Terminal Emulators For Linux
Next
Collect.js toJson() Method
Recommended Articles
Page :
How to Start a Career in Software Testing - A Complete Guide!
10, Jul 20
Top 5 Programming Languages for Automation Testing
13, Jul 21
7 Best Automation Testing Tools to Consider in 2021
25, Jul 21
Automation Tools for Testing Android Applications
02, Aug 19
Do You Want to Make Career in Networking?
06, Feb 20
How to Make a Perfect Career When You Have No Idea what to Pursue?
18, Jul 20
How to Make a Career in Cloud Computing?
04, Aug 20
How to Make a Career in Ethical Hacking?
10, Jul 20
5 Tips to Make a Career as a Linux Kernel Developer
09, Sep 20
Tips to Make a Career as a Game Developer
25, Nov 20
7 Tips to Make a Smooth Career Transition to Data Science
06, Aug 21
Career Opportunities in Big Data
04, Sep 15
How can You Boost Your Career to the Next Level?
21, Apr 20
Tips for restarting career after a break
12, Oct 18
UI vs UX Design : Which Career Option Should You Choose?
07, Jun 19
Career Paths For Software Developers and Programmers in 2019
19, Jul 19
Top Career Paths in Machine Learning
13, Jun 19
An Introduction to Freelancing: The Career Choice for Modern Millennials
26, Jul 19
Switch Your Career to Machine Learning - A Complete Guide
17, Nov 19
Top 5 Career Domains in Networking
02, Mar 20
10 Reasons to Choose MBA as Your Career
08, Mar 20
Career Opportunities for B.Tech Graduates in Defense Forces
13, May 20
CISM Certification: An Ideal Way to Pursue an Honourable Career
09, May 20
5 Most-Recommended Career Fields in Computer Science
29, Aug 20
Article Contributed By :