How to install MySQL connector package in Python?

MySQL is a Relational Database Management System (RDBMS) whereas the structured Query Language (SQL) is the language used for handling the RDBMS using commands i.e Creating, Inserting, Updating and Deleting the data from the databases.
A connector is employed when we have to use MySQL with other programming languages. The work of mysql-connector is to provide access to MySQL Driver to the required language. Thus, it generates a connection between the programming language and the MySQL Server.

To install Python-mysql-connector module, one must have Python and PIP, preinstalled on their system. To check if your system already contains Python, go through the following instructions:

Open the Command line(search for cmd in the Run dialog( + R).
Now run the following command:

If Python is already installed, it will generate a message with the Python version available.

If Python is not present, go through How to install Python on Windows and Linux? and follow the instructions provided.

PIP is a package management system used to install and manage software packages/libraries written in Python. These files are stored in a large “on-line repository” termed as Python Package Index (PyPI).
To check if PIP is already installed on your system, just go to the command line and execute the following command:

If PIP is not present, go through How to install PIP on Windows and Linux?

mysql-connector method can be installed on Windows with the use of following command: 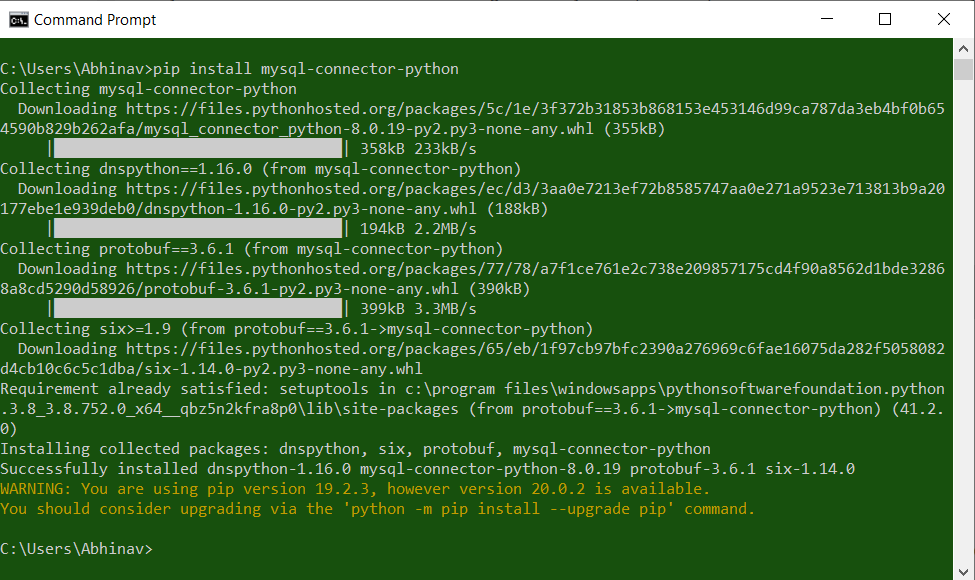 mysql-connector method can be installed on Linux with the use of following command: