How to Generate JSON with JsonGenerator in Java?

The JavaScript Object Notation (JSON) is a standard text-based format for representing structured data based on JavaScript object syntax. It is lightweight, flexible, and faster than XML, which is the reason that it is used widely for data interchange between server and client. If you ever work on Java Enterprise Applications then you will come across tasks where you might need to generate and parse JSON data for your application. For instance, RESTful web services use JSON extensively as the format for the data inside requests and responses.

The following examples show a JSON object with name-value pairs:

Java provides an API to parse, transform, and query JSON data using either the object model or the streaming model.

The object model works by creating a tree that represents the JSON data in memory. The object model generates JSON output by navigating the entire tree at once and hence, allows for processing that requires access to the entire contents of the tree at once. The tree can be navigated, analyzed, or modified. This approach is considered flexible but it is slower than the streaming model and requires more memory.

Java API provides the javax.json package, it contains a reader interface, a writer interface, and a model builder interface for the object model. The package also contains other utility classes and Java types for JSON elements.

In the object model, a JSON-object reference is created which represents the root of the tree and can be used to navigate the tree or to write it to a stream as JSON data. This JSON-object reference created can either be of type JsonObject or JsonArray, and both of them are the subtypes of JsonStructure. Which one it will depend on the format/content of the file.

Let’s describe each of them to be precise and clear.

Let us go through some traits of JsonObject

Sample code for JSON object is as follows in below illustration

Let us go through some traits of JsonArray

JsonObject and JsonArray can also be used in a nested manner to represent some special kind of data. You can either use the object inside the array or the array inside the object.

Now that we are clear with the basics, we can learn how to code.

Now let us come onto installing javax.json API. So, If you are using a Maven project then add this dependency to your pom.xml file:

Otherwise, in case you are creating a normal project then add the javax.json jar to your Libraries else download the jar file from here and follow the below steps

if we assume that we already have some data in the JSON format, and thus want to convert that into a java JsonObject, then we can make use of the javax.json.JsonStructure. 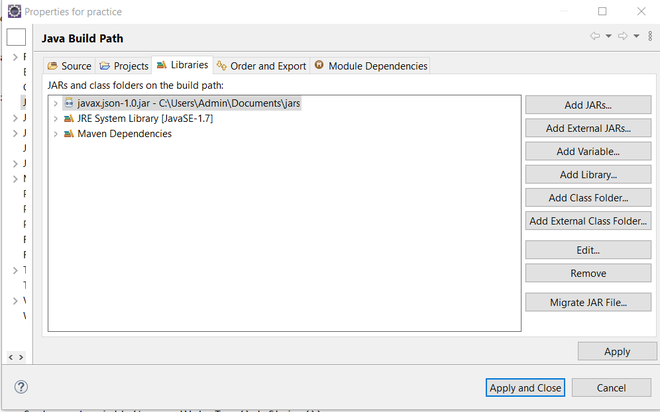 Let us assume we have a sample.txt that stores JSON data as follows:

Apart from just creating an object of the data, we need to have a way to read that data as well!

For navigating the data we will create a function navigateTree() that will take the JSON object/model that we created, as an input, and for every object or array that it encounters nested inside the JSON model, it will call the navigating function again, and if the element is a value, then it will print the standard output.

Now we can proceed to code for creating a JsonStructure out of this sample.txt file which is as shown below

2. Creating an object model from code

In order to create an object model of our own from scratch we will make use of the JSON class that provides a method createObjectBuilder() that creates a JSON object builder.  The JsonObjectBuilder interface acts as a builder for creating JsonObject models from scratch. This interface initializes an empty JSON object model and provides methods to add name/value pairs to the object model and to return the resulting object. The methods in this class can be chained to add multiple name/value pairs to the object.

3. Writing Object model to a Stream

The object models that we created in the above examples can be written to a stream using the JsonWriter class. JsonWriter writes a JSON object or array structure to an output source. This time we will write the contents of the sample.txt to an output stream after we have converted it to a JsonStructure.

Output: On the console, the following will be printed in a single line

Now dwelling onto next model,

The streaming model uses an event-based parser that reads JSON data one element at a time. The streaming model generates JSON output to a given stream by making a function call with one element at a time. This approach is adequate for local processing, in which the processing of an element does not require information from the rest of the data. The way it works is that the parser generates events and stops for processing whenever it either finds a key, or finds a value, or reaches the beginning or end of an object or array. The element found can be processed or discarded based on the code and then the parser moves to the next event.

In the upcoming code, we will make use of the same sample.txt file to parse it.

1. Reading JSON data using a Parser: We will use the JsonParser that provides forward, read-only access to JSON data in a streaming way. JsonParser parses JSON using the pull parsing programming model. In this model, the client code controls the thread and calls the method next() to advance the parser to the next state after processing each element. The parser can generate the following events:

Output: In the details.txt file the following data will be written in a single line:

My Personal Notes arrow_drop_up
Previous
How to Create Your Own Annotations in Java?
Next
Electrostatics of Conductors
Recommended Articles
Page :
How to Create and Close JsonGenerator?
06, Oct 21
JSON | modify an array value of a JSON object
03, May 18
How to use cURL to Get JSON Data and Decode JSON Data in PHP ?
28, May 21
How to generate Json File in PHP ?
19, May 21
How to parse JSON in Java
23, Jun 17
Convert Java Object to Json String using Jackson API
07, Dec 18
Convert Java Object to Json String using GSON
04, Apr 19
Convert Json String to Java Object Using GSON
15, Apr 19
Working with JSON Data in Java
08, Sep 20
How to Convert JSON Array to String Array in Java?
23, Mar 21
How to communicate JSON data between Java and Node.js ?
07, Apr 21
Java Program to Implement a JSON Parser
20, Sep 21
How to Ignore Unknown Properties While Parsing JSON in Java?
14, Apr 21
How to Convert Map to JSON to HashMap in Java?
17, Apr 21
JSON Formatting in Python
15, Oct 16
Working With JSON in SQL
20, Jun 21
Javascript | JSON PHP
30, Aug 18
JavaScript JSON
06, Jun 18
Converting JSON text to JavaScript Object
06, Jun 18
JSON | Data Types
16, Jul 18
Difference between JSON and XML
19, Jul 18
JavaScript | JSON HTML
10, Sep 18
JavaScript | JSON Arrays
19, Sep 18
Deserializing a JSON into a JavaScript object
25, Jun 19
Article Contributed By :