Improve Article
How to export a DataFrame to Excel File in R ?

The writexl is a simple package that contains a function write_xlsx() function which is used to write a dataframe to an Excel (.xlsx) file.

We can install the writexl package by running the command below in the R console.

Export the dataframe to excel

Example 1: In the first line of the code below, we have used library(“writexl”) function to load the package named -> “writexl”. We have then used write_xlsx() function of the writexl library to export the dataframe to an Excel file. In the below example, our write_xlsx() function takes 2 arguments, the first argument is the dataframe itself which is to be converted to an Excel file, the second argument is the path with “file_name.xlsx” which specifies the location where our Excel file will be saved with specified file_name.

To create a “.xlsx” with (multiple) named sheets, simply set “df” to a named list of data frames. 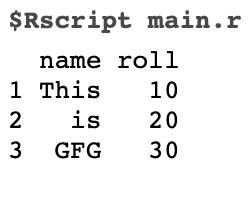 Our dataframe gets exported in the form of an Excel file to the specified location or path.

The only difference in this example from the previous examples is the arguments, in the example code below we have passed 2 extra arguments which help us have more control over the formatting of the Excel file. Those arguments and their usage are:

Our dataframe gets exported in the form of an excel file to the specified location or path.

Export the dataframe to a CSV

The write.csv() is an inbuilt function in R, we do not require installing any additional library for using this function.

In the code below, our write.csv() function takes 2 arguments, the first argument is the dataframe itself which is to be converted to a CSV file, the second argument is the path with “file_name.csv” which specifies the location where our CSV file will be saved with specified file_name.

My Personal Notes arrow_drop_up
Previous
How to create array using given columns, rows, and tables in R ?
Next
Check Data Type of each DataFrame Column in R
Article Contributed By :