How to detect Adblocker using JavaScript ?

In this article, we will be developing an adblocker detector using JavaScript. Adblocker is an extension that is used to block the ads which are served by the website. Adblocker blocks the DOM and the script which has the code to show ads. The adblockers have massive data of blocklist file names and the adblockers detect if the website is using any files from them, It restricts that file from downloading, so the ad script does not load. easylist.text is a huge list of blocklists that contains most of the adblocking file names.

According to a survey, 10% of people use adblocker for browsing with any ads. It means 10% less revenue by the website. This is sad for the websites that solely rely on ads, some of them use adblocker detecting script and restrict the user to enter the website without disabling the adblocker (But this is a bad idea from an SEO point of view).

The easylist.text has a huge list of such class names.  Every adblocker has its own set of class names which will be blocked that’s why we should not rely on only one class name. Some common class names are textads, banner-ads, banner_ads, ad-unit, ad-zone, ad-space which are detected by the adblocker for an ad.

Example 2: The following code can be used in any webpage under the <script> tag.

Output : You can paste this code in any browser console, or you can use it in a script tag. 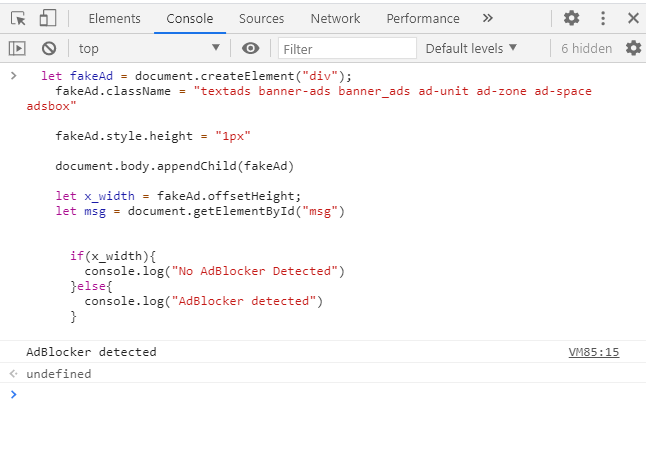