How to demonstrate the Presence of Water Vapour in Air?

Water vapour is the most potent of the greenhouse gases in Earth’s atmosphere. The maximum capacity of water vapour that can be contained in the air depends on the temperature of the air. Warm air can contain more water vapour.

Presence of Water Vapour in air

Water vapour contained in the atmosphere above the temperature of 100o C is referred to as steam. The liquid phase of water enters the gaseous phase using two primary processes: evaporation and boiling. Both of these are physical changes. Evaporation is the process where the molecules of water get out from the surface of the container into the atmosphere. Boiling is the process involving the transfer of thermal energy to water molecules. Both of these processes involve a phase transition.

The change of this water vapour back into the liquid state is known as condensation. The chemical properties of water remain the same, in all of these processes primarily, evaporation, boiling and condensation.

The biological cycle involving the changes in physical states of water is known as the water cycle, depicted below: 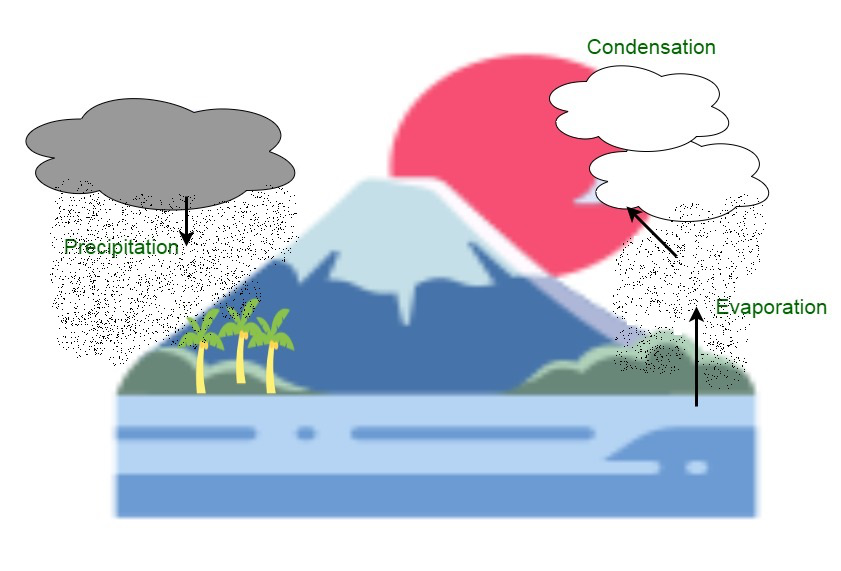 Experiment to show the Presence of water vapour in the Air

Water vapour is contained in the atmosphere, which can be easily depicted using the following experiment :

Procedure –  The following procedure can be performed to show the presence of water vapour in air :

1. Take the glass beaker and dry it from outside.

2. Place the ice cubes in the beaker.

3. Leave the ice along with the beaker untouched for some time.

Water droplets collect on the outside of the glass beaker. Take a dry blue cobalt chloride paper. In the presence of water, the paper turns pink in color. 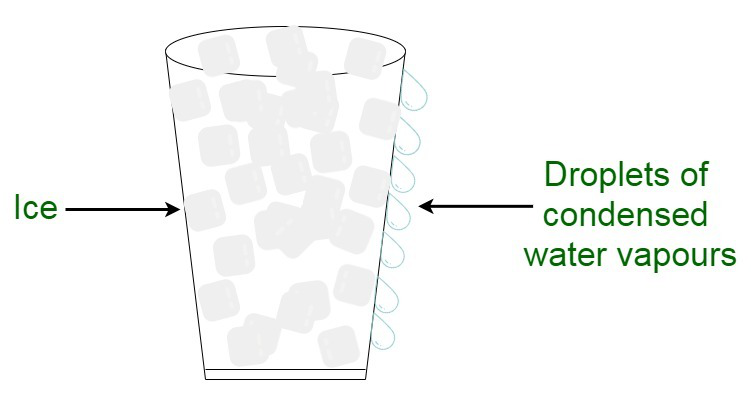 Question 1: Why do the muggiest days happen at the height of summer heat?

Since the warmer air contains more water vapour in it. Therefore, the muggiest days happen at the height of summer heat. When the temperature decreases, the air can contain less quantity of water vapour. A part of it may turn into liquid water.

Question 2: Water droplets are visible on the grass on a cool summer morning even in the absence of rain. Why?

The water droplets are visible on the grass on a cool summer morning even in the absence of rain most likely came from the water vapours which eventually lead to the formation of water droplets when it cooled to the dew point. At the dew point, water begins to condense out of the air.

Question 3:  Explain the procedure of the creation of water vapour.

The water vapour is produced as a result of the boiling liquid water. This is known as evaporation. It may also be produced from the sublimation of ice. It is removed from the atmosphere by the process of condensation under typical atmospheric conditions.

Question 5. Explain the different ways by which water vapour is put into the atmosphere.

Water vapour molecules are basically water droplets in gaseous form. These molecules are lighter than the molecules of nitrogen and oxygen which constitute to approximately 99% of the atmosphere.