How to Create Array of Objects in Java?

Java programming language is all about classes and objects as it is an object-oriented programming language. When we require a single object to store in our program we do it with a variable of type Object. But when we deal with numerous objects, then it is preferred to use an Array of Objects.

The array of Objects the name itself suggests that it stores an array of objects. Unlike the traditional array stores values like String, integer, Boolean, etc an Array of Objects stores objects that mean objects are stored as elements of an array. Note that when we say Array of Objects it is not the object itself that is stored in the array but the reference of the object.

Creating an Array Of Objects In Java –

An Array of Objects is created using the Object class, and we know Object class is the root class of all Classes.

We use the Class_Name followed by a square bracket [] then object reference name to create an Array of Objects.

Alternatively, we can also declare an Array of Objects as :

Both the above declarations imply that objectArrayReference is an array of objects.

For example, if you have a class Student then we can create an array of Student objects as given below:

Instantiate the array of objects –

For example, if you have a class Student, and we want to declare and instantiate an array of Student objects with two objects/object references then it will be written as:

The below figure shows the structure of an Array of Objects : 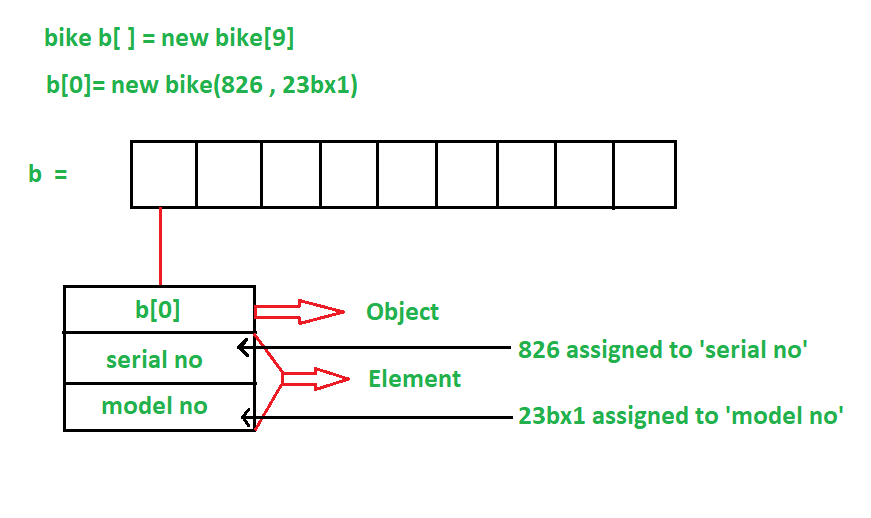 Different ways to initialize the array of objects:

1. By using the constructor:

At the time of creating actual objects, we can assign initial values to each of the objects by passing values to the constructor separately. Individual actual objects are created with their distinct values.

The below program shows how the array of objects is initialized using the constructor.

2. By using a separate member method :

By using a separate member method also we can initialize objects. A member function of the respective class is created and that is used to assign the initial values to the objects.

The below program shows how the array of objects is initialized using a separate member method.

Let’s see another example where an Array of Objects is declared with Initial Values:

Here declaration of an array of objects is done by adding initial values.