How to create a LESS file and how to compile it ?

LESS (which stands for Leaner Style Sheets) is a backward-compatible language extension for CSS. CSS itself is great for defining styles and applying them to various HTML elements but it has a few limitations.

There are several CSS preprocessors that try to address some of these shortcomings by supporting many features. LESS is one of them. It has additions such as variables, mixins, operations, and functions. They help make the code cleaner and easier to maintain.

Creating and Storing a LESS File:

Step 1: Go to your project folder, create a subfolder named CSS and then create a file named styles.less inside it. 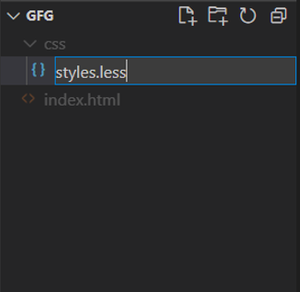 Step 2: Add the following code to the newly created file and save it:

Step 1: Move to the project directory in your terminal and write the following command:

Step 2: You can check if the compiler has been installed by using the following command:

Step 3: Move to the css subfolder (or the folder where the less file is stored)

A new file named styles.css will be created with the following content :

Step 5: Now, you can link this CSS file to your HTML file.

Previous
How to build an IP address finder app in ReactJS ?
Next
Different ways to apply colors in an HTML document
Related Articles
1. How to pre-compile LESS into CSS ?
2. How to create a loop structure in LESS ?
3. How to get file input by selected file name without path using jQuery ?
4. How to import regular CSS file in SCSS file ?
5. What are the differences between LESS and SASS ?
6. What is the use of Namespaces and Accessors in Less ?
7. CSS Preprocessor | LESS
8. How to import LESS through npm ?
9. Introduction to LESS
10. What are nested rules in LESS ?
Article Contributed By :