How to convert categorical data to binary data in Python? 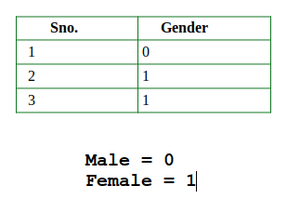 Our task is to convert Categorical data into Binary Data as shown below in python :

Step 1) In order to convert Categorical Data into Binary Data we use some function which is available in Pandas Framework. That’s why Pandas framework is imported

Step2) After that a list is created and data is entered as shown below.

Step 3) After that Dataframe is created using pd.DataFrame() and here we add extra line i.e. print(data_frame) in order to show the Categorical Data Output as shown below:

Step 4) Till step 3 we get Categorical Data now we will convert it into Binary Data. So for that, we have to the inbuilt function of Pandas i.e. get_dummies() as shown:

Here we use get_dummies() for only Gender column because here we want to convert Categorical Data to Binary data only for Gender Column.

Here we get output in binary code for Gender Column only. Here we have two options to use it wisely:

In the below program we used the first option and Write code accordingly as shown below:

Below is the complete program based on the above approach: