How to Configure SSH on Cisco Routers and Switches?

Overview :
SSH is a security mechanism, which can be used to access the privilege and configuration mode of a Router and a Switch from a remote location to perform the required action. The primary aim to configure SSH is to access devices deployed in a network from a remote location so that the required configuration can be performed and resources can be provided in a seamless manner. To learn about the SSH configuration, the Cisco Packet Tracer tool is used to demonstrate the steps to be followed and associated commands to be executed for this purpose. In addition to this, syntax and explanation of each command are provided along with screen-grabs.

SSH Configuration on Cisco Router :
Below listed steps will be followed to configure the SSH as follows.

Step-1 :
Cisco Packet Tracer is opened and network topology is created between a computer system and a router.

Step-2 :
Desktop settings of the Computer System need to be accessed to assign it with IP address, associated subnet mask and gateway address of the network.

Step-3 :
Further, the Command Line Interface of the router needs to be accessed to assign an IP address to the connected interface (Fast Ethernet 0/0 in this scenario).

Step-4 :
Configuration mode is accessed using configure terminal command through Router’s CLI. IP address 192.168.16.1 is assigned to interface with subnet mask of 255.255.255.0. In addition to this, no shutdown command is executed to change the interface state to up. With successful configuration of assigning IP addresses, a communication channel is established between the computer system and Router.

An IP address is assigned to Router’s interface 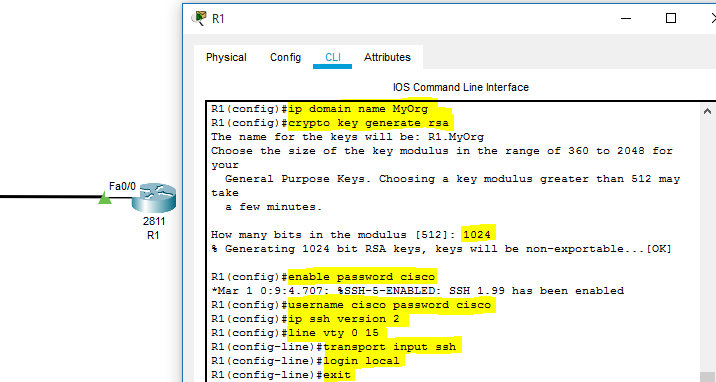 Step-6 :
To test the SSH configured on Cisco Router, Command Prompt is opened on Computer System and the ‘ssh -l username IP-address’ command is executed.

Previous
Types of Node Devices in a Computer Network: End devices and Intermediary Devices
Next
Configure IP in Windows 10
Related Articles
1. How to Disable Telnet on Cisco Switches and Routers?
2. Recovering password in Cisco Routers
3. TELNET and SSH in Cisco devices
4. How to Configure DHCP Server on a Cisco Router?
5. Single band, Double band and Multi band Routers
6. Packet Queuing and Dropping in Routers
7. Advantage and Disadvantage of Routers
8. Longest Prefix Matching in Routers
9. Difference between layer-2 and layer-3 switches
10. Types of switches in Computer Network
Article Contributed By :