How To Calculate Variance in Excel?

In this article, we will learn about the calculation of the variance(var) in Excel.

First, let’s learn about Variance. In real-life scenarios, we have populations like marks of students in a particular subject, salaries of multiple employees in a company. Let us consider, in a company named ABC, we have 5 employees.

Now, it will tell us the expectation of standard deviation. In other words, the factor of difference in salaries.

Where x represents the value, and μ is the mean of the sample.

Now, Let’s learn how to use it in Excel –

In Excel we have formulas for everything and as you might have guessed for var also.

We can have this list of formulas using ‘=’ symbol shown below

1. VAR.P – It calculates the var assuming that the entire population is its argument. It returns an approximate value and is used with a large population. Uses the same formula shown above.

2. VAR.S – It calculates the var assuming that the sample of the population is its argument. It returns an approximate value and is used with a large population. Uses the same formula shown below

4. VARPA – It includes text and logical symbols. It is used for the whole population. Uses “n” formula. 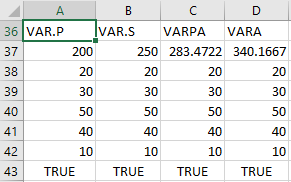 Here, the discrepancy occurs because VARPA and VARA read TRUE as 1 and VAR.P and VAR.S ignore it.

Note – VAR and VARP are for Excel 2007 or earlier. DVAR and DVARP are used for fetching data from Database.