How To Calculate Standard Deviation in Excel?

In this article, we will learn about the calculation of the standard deviation(std) in Excel.

First, let’s learn about Standard Deviation. In real-life scenarios, we have populations like marks of students in a particular subject, salaries of multiple employees in a company. Let us consider, in a company named ABC, we have 5 employees.

Now, it will tell us that how these salaries are dispersed across this company.

Where x represents the value, and μ is the mean of the population.

Now, Let’s learn how to use it in Excel.

In Excel we have formulas for everything and as you might have guessed for std also. We can have this list of formulas using ‘=’ symbol shown below

1. STDEV.P – It calculates the std assuming that the entire population is its argument. It returns an approximate value and is used with a large population. Uses the same formula shown above.

2. STDEV.S – It calculates the std assuming that the sample of the population is its argument. It returns an approximate value and is used with a large population. Uses the same formula shown below

4. STDEPA – It includes text and logical symbols. It is used for the whole population. Uses “n” formula. 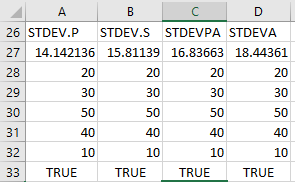 Here, the discrepancy occurs because STDEVPA and STDEVA read TRUE as 1 and STDEV.P and STDEV.S ignore it.

Note – STDEV and STDEVP are for Excel 2007 or earlier. DSTDEV and DSTDEVP are used for fetching data from Database.