How to Calculate Percentiles For Monitoring Data-Intensive Systems?

Monitoring often involves the use of percentiles. Unlike average values, which are heavily influenced by outliers, percentiles help understand how the system works most of the time. If 9 out of 10 requests are executed in 1 second and the last one takes 10 seconds, the average will be 1.9 seconds while the 50th percentile will be 1 second. This is but one example of how the average value is not appropriate for monitoring. Thus, the need to count percentiles arises, and for this very reason, we added a summary collector to our tarantool/metrics. Summary collectors calculate quantiles for the monitored data. Let me tell you about the algorithm we used to compute quantiles and how we implemented it for tarantool/metrics.

. For example, in HTTP request monitoring, a 0.5-quantile (basically the 50th percentile) that equals 1-second means that 50% of requests were processed in less than a second. To calculate a

for a sorted array of size n, you need to find the element with the index of

. This approach requires storing all the monitored data, and there can be a lot of data in metrics. If there are one billion requests to be processed, they would require a billion array elements, which would make up about 1 GB of data.

This problem can be solved by a number of algorithms that calculate approximate quantile values for data streams. We took the algorithm used in Prometheus. It compresses the original data, representing them as a set of segments. Each segment is described by a structure of three numbers:

is the length of the current segment;

is the approximate quantile of the segment. 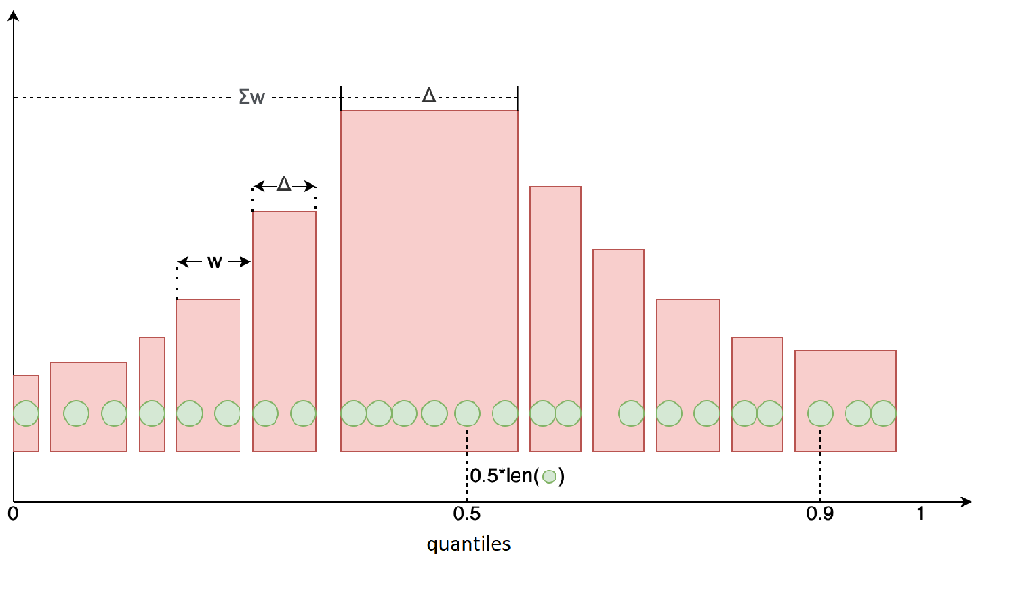 , and identify the corresponding segment. For example, the 0.5-quantile will be located in the middle of the green array on the graph, and the approximated value will belong to the corresponding red segment. The whole compression process is described extensively in the original article.

We followed the example of the Go implementation of this algorithm. Let’s create two arrays. One will serve as a buffer for the monitored values, and the other will be used as an observation array to store segment structures:

This algorithm operates only on sorted values. Let’s limit the buffer size to 500 values and define the size of the observation array as 2 × 500 + 2. As compression reduces the array size by approximately half, we’ll need on average 500 elements of the uncompressed array from the previous step + 500 elements added to the array in the current step + elements like

to simplify searching in the array.

We worked on our implementation iteratively: created a version, checked its performance with a profiler, compared it with the Go version, then looked for ways to improve it. We assessed our results using a simple benchmark: 108 samples, which takes about 8 seconds for the Go version. Now let’s dive into details about each iteration.

1. The pure-Lua version was quite bad, as the insertion took an average of about 100 seconds. The profiler data reads as follows:

The code underperforms on inserting observations into the corresponding array (`table.insert` call) and on buffer sorting (`table.sort`). That’s where ffi (foreign function interface) comes to the rescue. Ffi allows accessing functions from the C standard library and working with them in Lua as if they were routine Lua objects (well, almost; for example, while table indexing in Lua starts with 1, arrays created with C would still start with 0).

2. The Lua + ffi version involved building an array of double values instead of creating a buffer:

We will sort this array using the C standard library:

Then we’ll include the library in our Lua code:

Now we can populate the `double` array and invoke its sorting:

Tests showed a 3x increase in performance, with insertion time averaging up to 30 seconds. This time, the code underperformed because Lua tables do not have a fixed size, and element types are not predefined, either. Although this allows for more flexibility in table processing, it notably reduces performance. With ffi, you can switch from Lua tables to fixed-size C arrays, so that inserting and calculating array size costs O(1) instead of O(log n). Sorting is also much faster due to the fixed types and, therefore, fixed element sizes. But this solution introduces a GCC dependency that complicates application delivery. So we had to get rid of the C code.

3. Lua + ffi + homebrew sorting. The simplest quicksort in Lua turned out to run only a couple of seconds longer than our previous version involving a C library. This result was good enough for us, especially since it didn’t depend on GCC, so we decided to stop here.

The last step was to add quantile rotation using the sliding window algorithm. We create a ring queue consisting of several collectors (5, for example) and make one of them the leading one (head). Monitored values are written to each of these collectors. After the specified time has expired (60 seconds, for instance), the head collector is reset and the next one in the queue becomes the new head. The quantile value is fetched from the current head only. This approach ensures that the data are kept up-to-date because, without a sliding window, the values would be calculated over the entire period.

There are `age_buckets_count` collectors created in `metrics.summary`, so the total size is:

We performed load testing with Yandex.Tank. With all application metrics turned off, the results read as follows:

With our summary collector:

Performance dropped by ~10%, which is a cost you have to pay for using metrics. If you want to avoid significant drawdown, you might want to use the collector carefully, for instance, measure only a portion of requests.

Export to JSON, Prometheus, and Graphite is supported. Here is what the collected results might look like in Grafana: 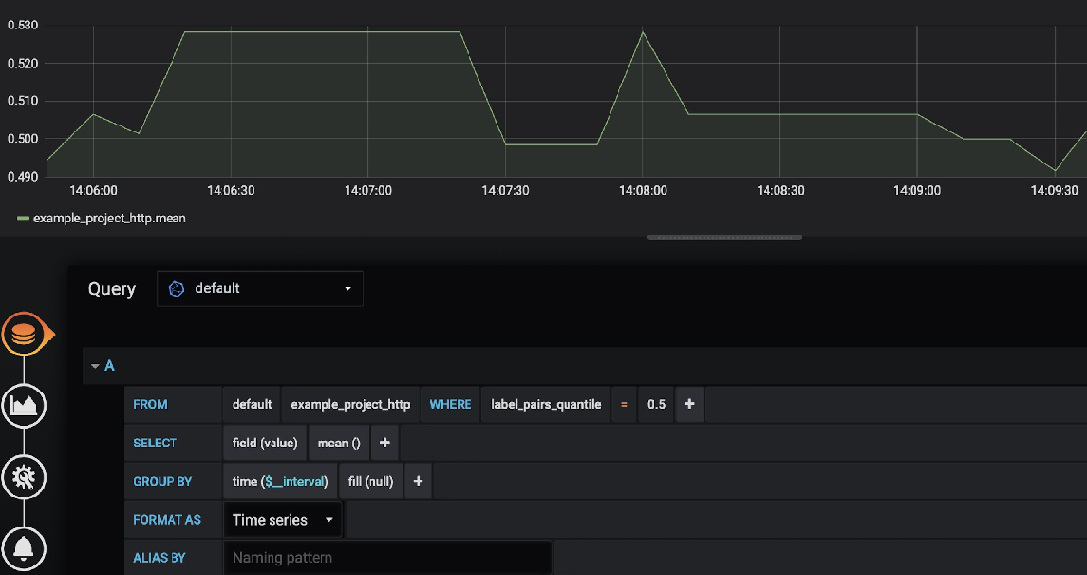 We wrote a summary collector for tarantool/metrics. During development, we encountered a performance challenge, which we solved using ffi. You can use the new collector to monitor values that may benefit from keeping track of quantiles, such as HTTP request latency. The summary collector can be applied in any Tarantool-based product where service response time is critical, like data-intensive applications where large amounts of data are accessed via HTTP requests. Monitoring this metric will help you understand what requests are straining your system.

This article is contributed by Igor Zolotarev.