How to Add JAR file to Classpath in Java?

JAR is an abbreviation of JAVA Archive. It is used for aggregating multiple files into a single one, and it is present in a ZIP format. It can also be used as an archiving tool but the main intention to use this file for development is that the Java applets and their components(.class files) can be easily downloaded to a client browser in just one single HTTP request, rather than establishing a new connection for just one thing. This will improve the speed with which applets can be loaded onto a web page and starts their work. It also supports compression, which reduces the file size and the download time will be improved.

Methods: JAR file can be added in a classpath in two different ways

Step 1: Right-Click on your project name 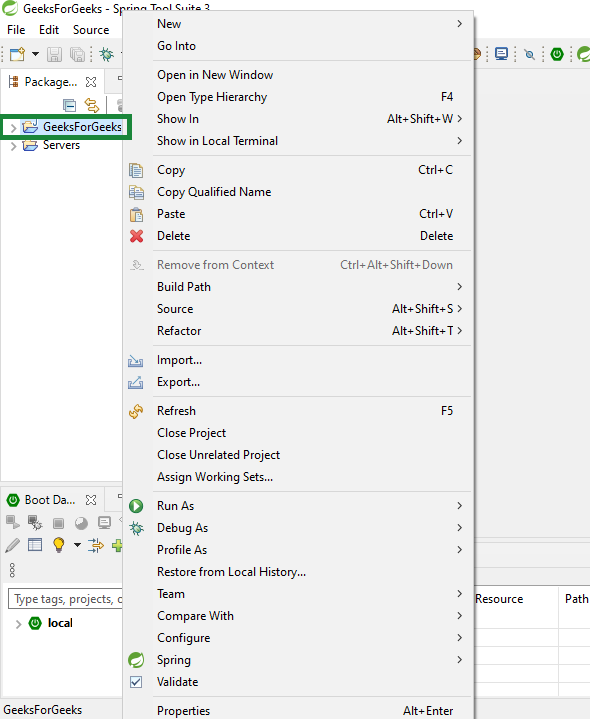 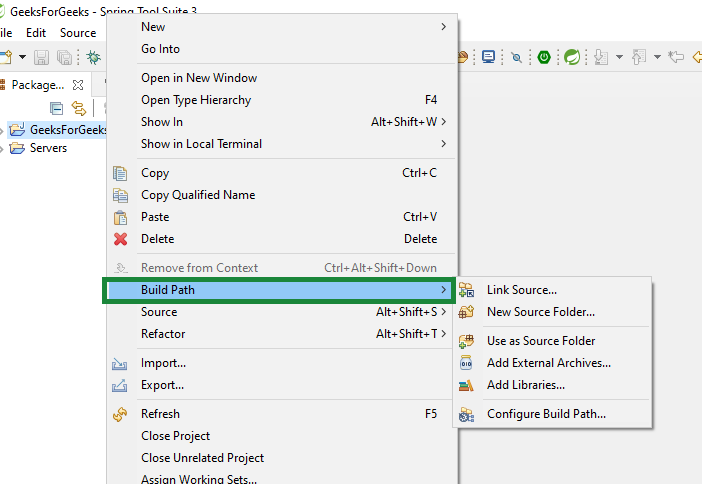 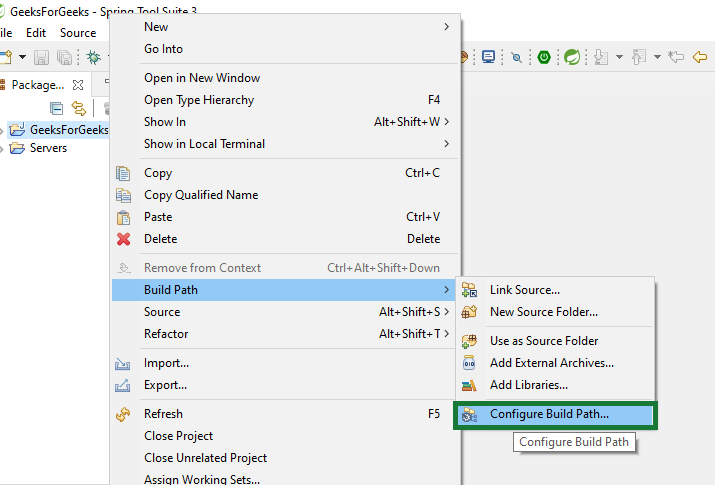 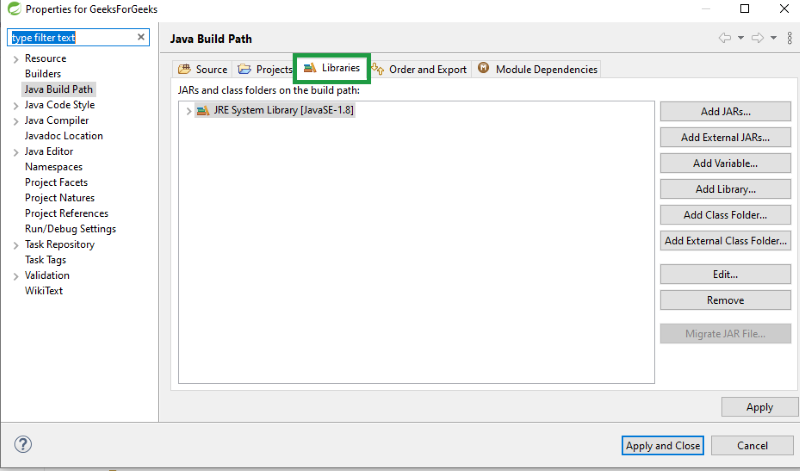 Step 5: Select the jar file from the folder where you have saved your jar file 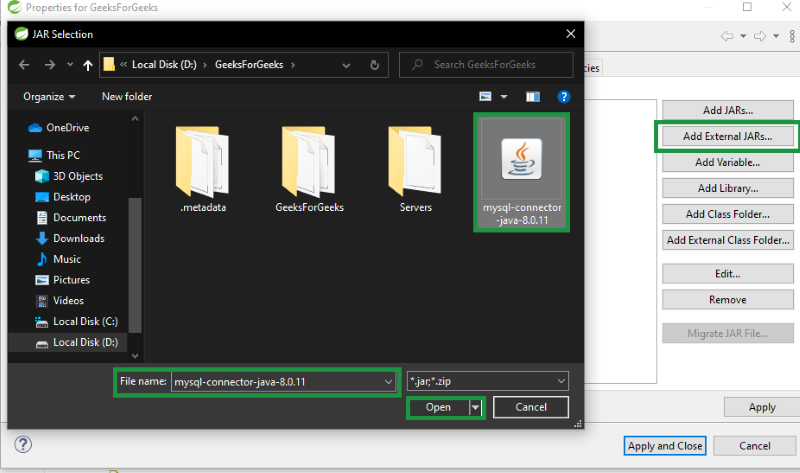 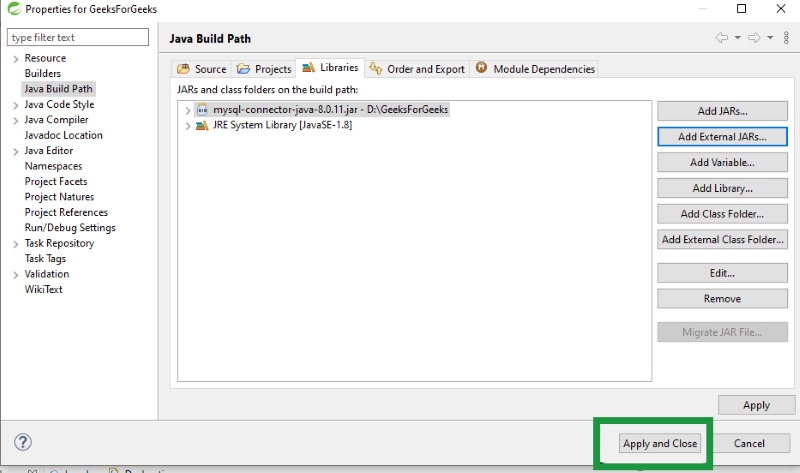 Command 1: By including JAR name in CLASSPATH environment variable

Command 2: By including name of JAR file in -a classpath command-line option

This option is viable when we are passing –classpath option while running our java program like java –classpath $(CLASSPATH) Main. In this case, CLASSPATH shell variable contains the list of Jar file which is required by the application. One of the best advantages of using classpath command-line option is that it allows us to use every application to have its own set of JAR classpath. In other cases, it’s not available to all Java program which runs on the same host.

Command 3: By including the jar name in the Class-Path option in the manifest

When we are running an executable JAR file we always notice that the Class-Path attribute in the file inside the META-INF folder. Therefore, we can say that Class-Path is given the highest priority and it overrides the CLASSPATH environment variable as well as –classpath command-line option. Henceforth, we can deduce that its a good place to include all JAR files required by Java Application.

Command 4: By using Java 6 wildcard option to include multiple JAR

From Java 1.6+ onwards we can use a wildcard for including all jars in a directory to set classpath or else to provide Java program using classpath command-line option. We can illustrate the Java command example to add multiple JAR into classpath using Java 6 wildcard method as follows,

In this method, we include all JAR files inside ‘D:\lib’ directory into the classpath. We must ensure that syntax is correct. Some more important points about using Java 6 wildcard to include multiple JAR in classpath are as follows:

In Java 6 wildcard which includes all JAR, it will not search for JARs in a subdirectory.

Wildcard is included in all JAR is not honored in the case when we are running Java program with JAR file and having Class-Path attribute in the manifest file. JAR wildcard is honored when we use –cp or –classpath option

By using the above method we can add multiple JAR in our classpath. JAR from ext directory can be loaded by extension Classloader. It has been given higher priority than application class loader which loads JAR from either CLASSPATH environment variable or else directories specified in –classpath or –cp

My Personal Notes arrow_drop_up
Next
How to Set Multiple Classpath in Java in Windows?
Recommended Articles
Page :
How to Set Classpath When Class Files are in .jar file in Java?
11, Feb 21
How is CompileTime classpath different from RunTime classpath in Java?
28, Jun 19
How to Add External JAR File to an IntelliJ IDEA Project?
01, Feb 22
Runtime JAR File in Java
25, May 21
Creating and Executing a .jar File in Linux Terminal
04, Jul 21
Java.util.jar.JarEntry class in Java
27, Jan 17
Java.util.jar.JarInputStream class in Java
28, Jan 17
CLASSPATH in Java
05, Nov 17
How to Set Classpath in Java?
18, Nov 20
How to Set Multiple Classpath in Java in Windows?
06, Dec 20
Loading Resources from Classpath in Java with Example
02, Feb 21
Different Ways to Set a Classpath in Java
23, Oct 21
Difference Between Path and ClassPath in Java
28, Jan 22
Working with JAR and Manifest files In Java
11, May 17
Jar files in Java
16, Dec 16
Different Ways to Copy Content From One File to Another File in Java
23, Oct 20
How to Convert a Kotlin Source File to a Java Source File in Android?
17, Nov 21
Java Program to Read Content From One File and Write it into Another File
27, Jan 21
How to Add Suffix and Prefix to The Label & Add Legend to Graph in Android?
04, Jun 21
How to Add Videos on README .md File in a GitHub Repository?
31, Dec 21
C program to check whether the file is JPEG file or not
05, Jun 20
How to Create the Virus File that Deletes the IMP File of the Operating System?
10, Apr 21
Java.util.ArrayList.add() Method in Java
28, Sep 17
Java.io.File Class in Java
12, Dec 16
Article Contributed By :