How to Add a Y-Axis Label to the Secondary Y-Axis in Matplotlib?

Sometimes while analyzing any data through graphs we need two x or y-axis to get some more insights into the data. Matplotlib library of Python is the most popular data visualization library, and we can generate any type of plot in Matplotlib. We can create a plot that has two y-axes and can provide different labels to both of the y-axis. We can make a plot with two different y-axes by creating or using two different axes objects with the help of twinx() function. First, we create figure and axis objects and make the first plot. And we also set the x and y-axis labels with the help of the axis object created.

Axes object: Axes are the most basic and flexible unit for creating subplots. Axes are used for the placement of plots at any location in the figure. A given figure of the plot can contain many axes, but a given axes object can only be in one figure of the plot.

In this example we have created a plot with two different y-axes by using two different axes objects a and a2 with the help of twinx() function. ax.twinx() creates a new Axes object ax2 for a y-axis that is opposite to the original y-axis. The second axes object ax2 is used to make the plot of the second y-axis variable and to update its label.

In this example we have created a bar plot using same method.

We can add a y-axis label to the secondary y-axis in pandas too. Generating a plot from DataFrame and also without using twinx() function. In this example, we will use simple DataFrame.plot() function with some parameters to specify the plot.

When we set the secondary_y parameter to be True in DataFrame.plot method, it returns different axes that can be used to set the labels. 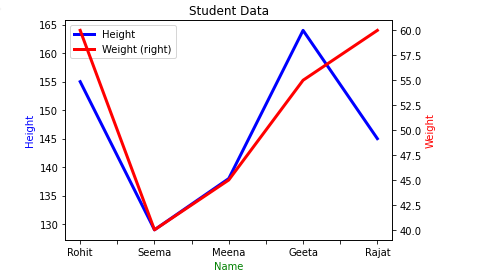 In above example, the plot is created without using twinx() function, but we have created two axis object ax and ax2 as given in other examples for two y-axis to make the plot with two y-axis and update its label.

My Personal Notes arrow_drop_up
Previous
Largest Left-Truncatable Prime in a given base
Next
Rename column by index in Pandas
Recommended Articles
Page :
PyQt5 – How to hide label | label.setHidden method
03, Mar 20
PyQt5 – How to change size of the Label | label.resize method
10, Mar 20
PyQt5 Scrollable Label - Setting tool tip to the label part
12, Apr 20
PyQt5 Scrollable Label - Getting tool tip text of the label part
12, Apr 20
PyQt5 Scrollable Label – Setting tool tip duration to label part
12, Apr 20
PyQt5 Scrollable Label – Getting tool tip duration of the label part
12, Apr 20
PyQt5 Label – Checking if label is window type
01, May 20
PyQt5 Label – Checking if label is widget type
01, May 20
Difference between Primary and Secondary Memory
06, Apr 20
Primary and secondary prompt in Python
17, Apr 20
Python Program to Sort Matrix Rows According to Primary and Secondary Indices
21, Jan 21
AWS DynamoDB - Query the Global Secondary Index
11, Apr 21
AWS DynamoDB - Create a Global Secondary Index
11, Apr 21
Adding a Secondary Axis to an Excel Chart
29, May 21
Python | Add Label to a kivy window
24, Apr 19
PyQt5 – How to add image in Label background ?
10, Mar 20
PyQt5 – How to add padding to a Label ?
10, Mar 20
PyQt5 - Add Label to StatusBar
31, Mar 20
How to Rotate X-Axis Tick Label Text in Matplotlib?
21, Jan 21
Difference between “git add -A” and “git add”
20, Jun 21
How to add a legend to a scatter plot in Matplotlib ?
17, Dec 20
How to Add Markers to a Graph Plot in Matplotlib with Python?
16, Nov 20
How to Add Axes to a Figure in Matplotlib with Python?
02, Dec 20
How to manually add a legend with a color box on a Matplotlib figure ?
22, Dec 20
Article Contributed By :