Cache: Caching is a technique used for improving the performance of servers and a lot of devices used in day-to-day life.
In caching, the result of certain computation or task is stored somewhere, and if the same computation is required again, it is served from that location itself rather than doing the computation again. This reduces computation and improves performance, thereby providing a better user experience.
A lot of apps cache data for the first time they’re fired, hence are able to efficiently provide responses. Similarly, the majority of servers have advanced cached mechanisms for endpoints that serve the same response for the majority of the time.

Cache can be stored using various techniques like in-memory cache, file cache or a separate cache database.
This article demonstrates usage of caching in Node.js using package node-cache which is an in-memory caching module.

Ensure that node is installed, by following command:

Example: Create a file server.js in the directory with following code:

Output: Open the link: http://localhost:8000/ in desired browser to verify

Create a simple API that performs a costly operation to serve response (To simulate an external API / Database query).

Add following code at the end of server.js

Stop server by Ctrl+C and start again by node server.js.
In the browser, open Network tab in Chrome Dev Tools and check time required to get response. 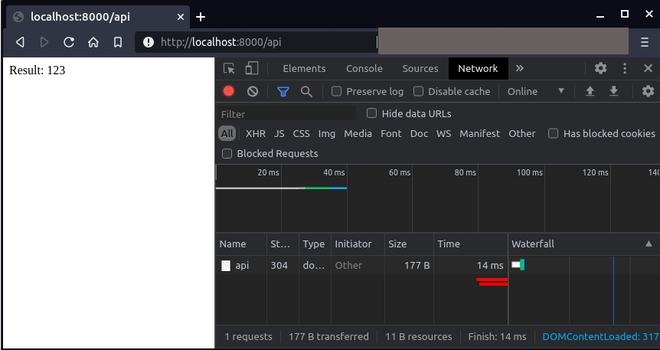 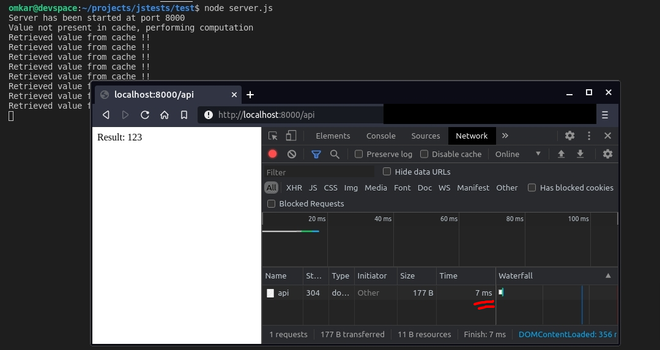 Note: The difference between response time is not significant here, since the computation is very less, however for large and scaled projects, it provides a massive performance boost.
For example, GeeksforGeeks also uses advanced caching mechanisms for various purposes to achieve efficiency.

My Personal Notes arrow_drop_up
Previous
How to specify the width of an input element in HTML5 ?
Next
How to set the height and width of the canvas in HTML5 ?
Recommended Articles
Page :
How the single threaded non blocking IO model works in NodeJS ?
04, Feb 21
Nodejs | GM solarize() Function
14, Apr 20
Email Verification using OTP in NodeJS
19, Feb 21
NodeJS Program Lifecycle
18, Feb 21
NodeJS process.nextTick() Method
05, Mar 21
How to make to do list using Nodejs ?
31, Jan 22
How to kill all processes in NodeJS?
28, Mar 22
How to Deploy Contract From NodeJS using Web3?
27, May 22
Create Newsletter app using MailChimp and NodeJS
31, May 22
Node.js fs.access() Method
28, Apr 20
Node.js fsPromises.access() Method
10, Jun 20
How to access HTTP Cookie in Node.js ?
25, Nov 20
How to pass/access node.js variable to an html file/template ?
06, Apr 21
How to access ExpressJS env variables in an API endpoint ?
03, May 21
How to Access the File System in Node.js ?
09, Jul 21
How to prevent access to admin pages using Node.js and React.js ?
22, Mar 22
Encrypting Data in Node.js
18, Apr 19
Create a Newsletter Sourcing Data using MongoDB
25, May 21
Node.js Readable Stream data Event
05, Mar 20
How to Validate Data using joi Module in Node.js ?
27, Apr 20
How to Validate Data using validator Module in Node.js ?
26, Apr 20
How to Validate Data using express-validator Module in Node.js ?
28, Apr 20
Data Scraping for Android Apps using google-play-scraper in Node.js
28, Apr 20
How to Generate fake data using Faker module in Node.js ?
11, Jun 20
Article Contributed By :