How Much Python Should You know To Learn Django?

How much python is required to learn Django?? 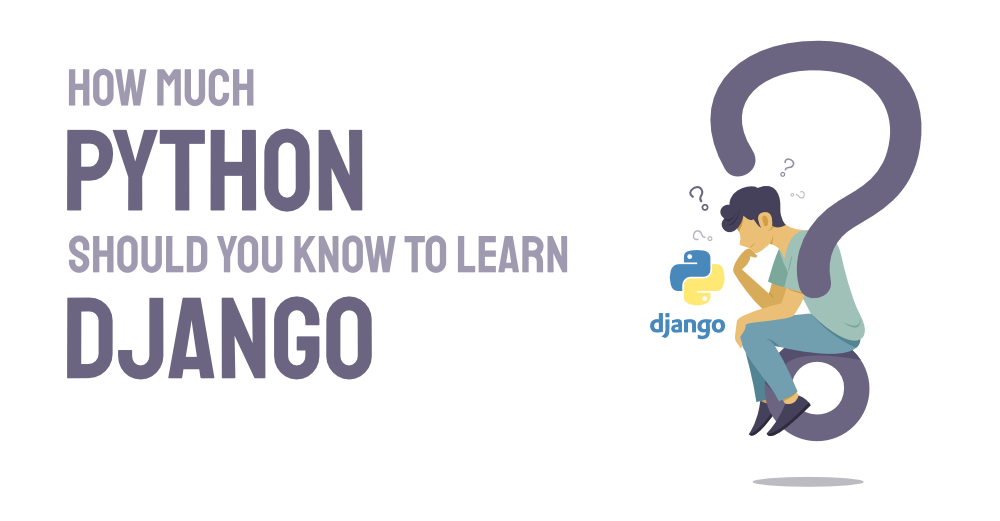 Different Django experienced developers have different opinions on this topic and everyone has a different approach to learning Django.

Now coming to the main topic….how much Python is required to learn Django?

Jumping to Django directly may backfire on you if you aren’t confident in Python. A lot of times it happens that while building an application in Django we struggle with the issues in it, but it is not the framework that creates the problem, it is Python that is responsible for the issues.

But the question is…do we need to learn everything in Python to start Django…and the short answer is no…….

Instead of learning everything in Python and then starting with Django, learn only sufficient Python so that you can start with Django and then while learning Django you can learn Python, both in parallel. Start building an application and see what kind of real-world problems you run into and then learn that on the way. Half of the coding will be done on trial and error, doing the research also. If you follow this approach then you won’t have to spend a lot of time learning Django and Python.

Firstly you need to download python and get that up and running. Understand how to run a simple pip install and install Django. Once you are done with it start with learning the basics…

If you’re a beginner in programming then you need to first understand the basics of Python. Variables, data types, conditional statements, for-loops all these things come into the basics of python. Understanding these concepts is important in order to proceed not just in python but also in programming. These concepts are part of all the programming languages. You will be struggling a lot in Django if the basics are not clear to you.

Once you have gone through the basic concepts, you need to learn iterables. In python lists and tuples are described as iterables. Their objects allow you to iterate through it using for loops or while loops. These objects are essential ways that we can actually loop through the massive amount of data.

In Django most of the time, you will be working with Querysets. Query sets are also objects, and you can consider them as storage like a list, but they also have some other properties that allow you to perform some complex operations such as filtering, mutations, comparisons, etc. So Query sets are a little complex than lists, but they behave in the same way because they are iterables.

We can loop through the Querysets in the exact same way we can loop through lists and tuples. So if you’re not familiar with lists, tuples, and iterating through an object then surely you will struggle with Query sets in Django. So make sure that you have a good understanding of iterables and how to iterate over an object.

In Python, dictionaries store the data in key-value pairs. For example, you can create an object and that object can have the first name, last name, and age. We can store all the values in the dictionary. In Django, you will be working with dictionaries while adding the `context` to a template.

You can access the information of context inside an HTML template. Context is the concept of working with templates in Django. This is the reason you should understand it first as a python object.  Also, understand the methods in dictionaries such as `.update`, `.pop`.

Classes are a crucial part of Django. Understand the concept of classes before you start working on Django. In Django most of the code, you will be writing using classes. You need to focus on the things given below to learn everything about classes.

In Django, you will be using classes in Models, Forms, and Views. You can also use functions, but classes make things simpler in your application. Below are some details to learn everything about classes.

Another important concept to learn in Python is packages. While working with Django you will be importing a lot of functions and classes from Django modules. You will be struggling a lot in your Django application if you don’t know how to import and work with libraries and third-party packages.

You can start with the python libraries such as ‘pandas‘ and ‘numpy‘. Understand how to import and work with the Python packages.

9. Basic  Understanding of HTML and CSS

HTML and CSS may not be related to Python but there are necessary for Django. Django Templates uses HTML and CSS to structure and style the webpages. Django builds these web pages dynamically with the help of python iterable, and dictionaries. Django templates can also extend themselves. So good understanding of HTML tags and CSS attributes helps you dynamically present these web pages in a better way.

It’s not easy to learn Django if you don’t have a strong foundational knowledge of Python. You don’t need to learn everything in Python but at least make your fundamental concepts clear in Python to start with the Django application. Focus especially on classes and object-oriented programming in Python. It will be easier for you to dive into Django if the fundamentals are clear to you.