How is Sound Produced by Humans?

Music or sound is a necessary component of life. Life would be bored and bitter without it. Sound, in general, is a source of energy that allows us to understand. Have you ever considered how it is produced by multiple instruments and living organisms? Vibrations allow it to be generated. We sense waves if we talk forcefully and rub our throat. The reason for these vibrations is the voice box known as the larynx which is fitted in your throat that’s why whenever you shout or even buzz like a bee your throat will give light vibrations continuously. There are different types of structures in different mammals to produce sound like birds have Syrinx, reptiles have glottis and similarly, humans have a larynx.

Hence, the following points can be made out of the above explanation to understand the production of sound by humans as: 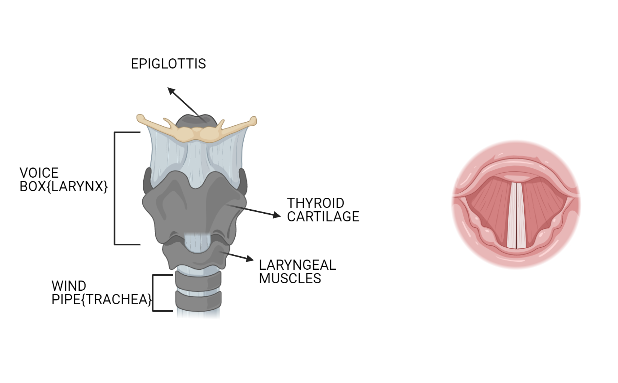 Now, we only have to study about the Larynx organ in this chapter:

Where Larynx Is Situated??

The vocal folds generate sound whenever they come close and then it produces sound vibration as air passes through them during the process. And these are those vibrations that produce the sound wave for our voice.  The vocal folds which are stuck inside the voice box to the largest of the throat cartilage is known as  ‘Adam’s apple’.

To form the sound  lucid and to remain away from the harshness, the vocal folds should vibrate simultaneously in a symmetric way and continuously.  The vibration rate decides the sound pitch .  And when the voice is rough, the reasons could be following

Muscles joints with vocal cords could make the cords rigid or loose. When the vocal cords are tight and thin, the type and the quality of voice is different from when they are loose and thick.

Need Of The Voice Box

Question 1: What is the size of the vocal cord in humans? Who has the larger one with how much?

Females have 15mm of vocal cord while males have 20mm normally. Therefore, Men have a longer vocal cord.

Question 2: Why the voices of men, women, and children are so different?

Because of the frequency of pitch and the amplitude of the loudness , person of every age have a different touch of voice.

Question 3: Which organs are used in producing sound?

There are 3 organs used in the process of producing sound name as:

Question 4: What can be felt while talking, on our throat?

There are the vibrations made in the larynx while talking that can be feel from outside the body.

Question 5: What are the different types of sound that can be produced?

Sound can be of two types:

Question 6: Which organ of our body is responsible for producing vibrations?

Question 7: What do you mean by inaudible sound? What are its effects?

Sound which is of high range, pitch and vibrations are known as inaudible sound . It creates noise pollution and can also damage hearing power of the body.