Git… The most popular and common tool used by programmers in the programming world. 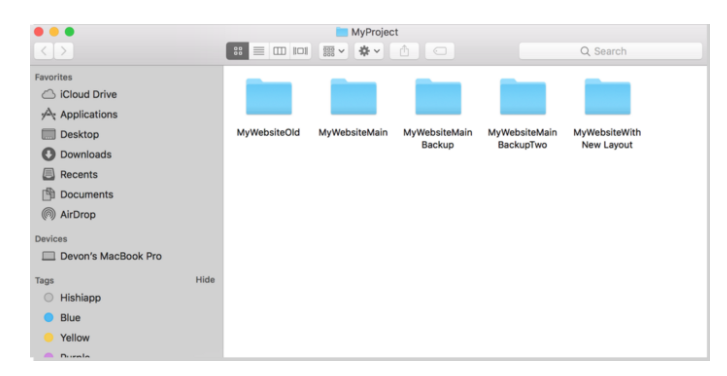 The above picture reminds you of your developer journey. This is how you tried to keep the backup of your files when you were scared of doing something wrong in your project. You followed this traditional approach thinking that you may create a mess in your project.

After a couple of days, you open your project. You want to check what you did in the previous copy, but when you see tons of files in your project, you become confused. Now you are unable to identify which file does what and what the sequence of these files. Which file was running smoothly, which files had what kind of changes, why the file was changed, and which file serves no purpose in your project?

You’re not alone, and we all have been there at some point in our development career. It is a huge pain to check the code in files manually to identify their purpose.

Now you might have understood the importance of Git (if you are a programmer, and you are familiar with this tool) in programmers life. It saves your day and makes the life of software development teams much easier.

It’s super easy to manage your code with Git, and also it’s easy to fix your bug if something goes wrong. Today most programmers (especially newbies) know its importance.

You might have used various commands in git….git add, git push, git pull, git commit, etc but if we ask how things work behind the scene and how the flow of Git looks like then what would be your answer…

Most of us know don’t know…

Today in this blog we are going to explore this amazing tool a bit more. We will discuss in-depth how Git works internally.

Take your chair, sit back, relax and give your weekend or a couple of hours to know your favorite tool a bit more.

In case you’re not familiar with this tool then read the blog An Ultimate Guide to Git and Github.

Let’s come to the main point….the core functionality of Git. How Git Handle your files and the workflow of it.

The core functionality of Git works in mainly three file states modified state, staged state, or committed state. If you include a remote repository then you can divide its core functionality into four states. Your files can be in any one of the states. We will discuss each one of them but for better understanding, we are going to take a real-life example.

Consider a scenario that you are asked to create a nice photo album with some caption or message along with the pictures. How would you do that??

Most probably you will perform the actions given below…

At any time you can turn the pages of your album, and you can remind yourself how things looked like at that specific moment. We can relate this example with the four states in Git, and we can understand it much better. How….?? Let’s discuss that.

In this state, your files are modified, but changes are not saved. You do not instruct Git to monitor these files. Basically, these are uncommitted files. Taking the picture is just like making changes in your files. You create files, you write code to add some features, or you delete the files. You’re preparing these files to save in the Git commit.

These files are not permanently saved, and your work is still in progress. Anytime you can write, re-write, delete or make changes in your file.

Git hasn’t committed these files, so even after adding the files to the staging area, you still have the option to modify your files. You can make modifications, and you can add this modification to the staging area. This is like clicking some new pictures and then deciding to paste them into the photo album.

In this final stage, you successfully save the files in the .git repository, and you create a commit for them. Creating the commit is just like gluing your pictures in the photo album. In this final phase, you record the staged version of your file in the Git directory.

Always write a descriptive commit message that describes clearly what features you have added, what changes you have made, or which bug you have resolved in your codebase.

Now let’s talk about the file locations for your files when you are working with your files. Based on the state of a file we will discuss the location where Git will place it.

For different states, the locations of your file will be different. We are going to discuss the complete workflow based on the state and locations of the file.

Now, take a look at the picture given below to understand the complete workflow… 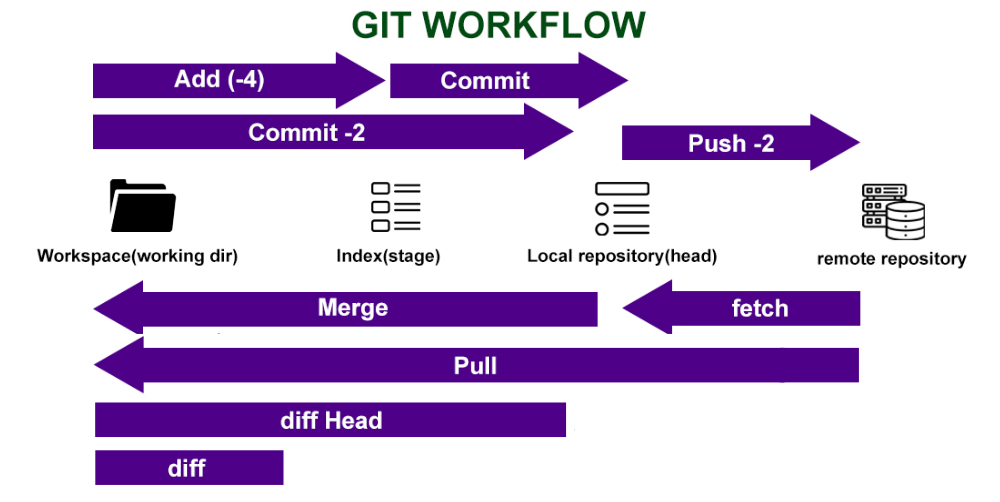 The above image is self-explanatory, and it shows a complete workflow. You might have understood what’s the purpose of each command in Git. Few things, from the above image we would like to explain here to make your concept more clear.

Now the question is…if we can do everything in one single command git pull then why we need to execute two separate commands git fetch and git merge?

The answer is….executing two separate commands allows us to compare files before we actually get the latest version of the files. In other words, you can fetch the files from a remote repository using the git fetch command, and then you can run the git diff HEAD command to check what’s the differences are between the files that exist in the working directory and the files that exist in the local repository. Based on the differences you can decide whether you want to merge the files or not.

git diff (without head) command tells you the difference between the files that exist in the working directory and the files that are staged for commit. This command basically tells you that what you could still add to the stage for the further commit, that you haven’t already.

When you open a project initialized by Git you come across a directory .git. This is the place where all the magic happens and in this section, we will discuss the internal structure of .git.

1. objects: This directory acts like a database, and stores all the repos files. Their content is encoded and compressed.

2. refs: Refs have stored as normal text files in the .git/refs directory and this file stores the pointer into commit objects. In simple words, if you need to manipulate an object you need to remember the hash of the object. Memorizing these hashes are difficult so, git has reference. These refs contain the hash of a commit object.

3. HEAD: This file contains the path to the reference that points to the current branch you are working on check out.

4. config: In this file, you can find repo configuration.

Some Plumbing Commands You Should Know

Almost all the git commands such as git add, git commit is made up of some low-level core commands. These commands are called plumbing commands (We know this is a new word for you…).

Take a look at the picture given below, and then we will explain it in detail…

We tried our best to make you familiar with the internal structure of Git, and now you might have some idea about the workflow of Git. How the git commands works under the hood and what operations are performed internally.